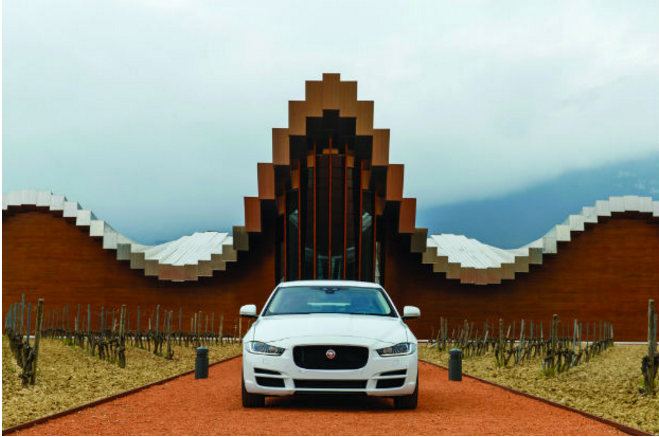 There is so much riding on the shoulders of Jaguar’s XE that you almost feel sorry for it. Knowing full well that for long-term survival, it needs to be pinching sales from BMW’s 3 Series, Mercedes’ C-Class and Audi’s A4, Jaguar has literally started from scratch. It has built an entirely new model unrelated to any other it produces. In other parts of the world, where business fleets are the mainstay of car sales, the XE has certainly caused a few waves but does it make any sense here, in the Middle East, where the German marques dominate its sector?

Certainly in ‘S’ guise, the XE is a startling looker and performer but we are trying for size the R-Sport version. This is not quite as exciting as it sounds but will be the volume seller for business users if Jaguar has its way. Ignore the nomenclature on the boot lid, which hints at some 2.5-litre potency. The engine is actually a 2.0, 240hp, four-cylinder unit that’s currently built for Jaguar by Ford. Do not let that put you off, however, because Ford’s units have an excellent reputation for longevity – itself a highly desirable trait in our extreme climate.

Looks wise, the XE is a handsome thing, if a little derivative. From the front it looks like an XF or XJ, only slightly smaller. Approaching it from the rear you would be forgiven for assuming it is an Audi A5. Nevertheless, it will cut a dash in the office car park and should still look fresh years from now. Inside, the dashboard is an exercise in elegant restraint with a clean and fuss-free design while the chunky steering wheel and figure hugging seats add a certain sportiness in keeping with Jaguar’s heritage.

The navigation and infotainment systems are better than Jaguar’s previous efforts but still cannot hope to match those found in contemporary BMWs or Audis. Indeed, the materials used to trim our test car are a bit low rent. The plastics look and feel cheap, especially the controls either side of its central screen. And I cannot help but feel it is more Mondeo than Jag. There is not the feeling of luxury or over-engineered excellence you experience inside its German rivals. Still, it is an intelligently laid out cabin that offers plenty of room for five occupants, with plentiful head and legroom in the rear.

On the road is where this car should really shine, however, and in many respects it does. Jaguar’s well earned reputation for chassis development and engaging dynamics comes through loud and clear with a compliant ride that does not overly cushion. It is refined, comfortable, quiet and com- posed at all times.

The eight-speed ZF automatic trans- mission shifts seamlessly between ratios and is perfectly suited to the punchy turbo- charged engine but it is that four-cylinder motor that lets the side down. To eek out any meaningful performance from it, you need to work it hard and when you do that things tend to get a bit thrashy. The engine note has all the appeal of a washing machine at full spin and there is an annoying tendency to lag when you stamp on the throttle, meaning responses are not all they should be. It just does not feel or sound very ‘Jaguar’.

As a result, the R-Sport does its name something of a disservice and potential buyers would do well to put aside any performance pretensions. Do that and this XE makes a convincing case for itself as a stylish and capable car that will not bore you on the commute or disgrace you in front of neighbours, colleagues or clients. Once Jaguar starts building its own engines for this model, it might not disgrace you at the lights either.