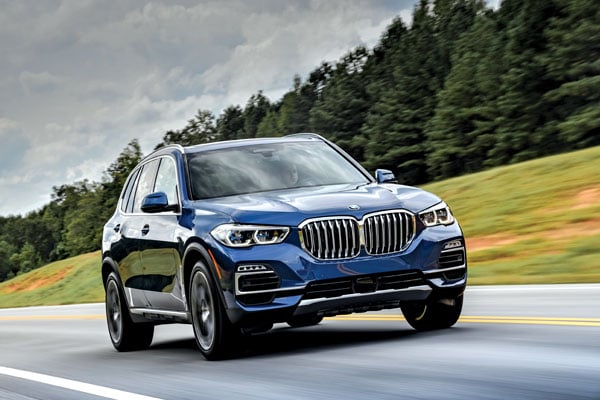 BMW’S biggest manufacturing plant is not in Germany, but in the United States where its Spartanburg facility churns out 1,900 vehicles per day. The Atlanta, Georgia, factory specialises in the production of the X3, X4, X5, X6 and upcoming X7 models in the prosperous SUV category that collectively take the lion’s share of BMW’s sales.

The venerable X5 started it all for BMW back in 1999 as the company’s first SUV and has since sold 2.1 million units of its own over three generations in a sector that even two decades later is still growing by more than 20 per cent.

It means that this new fourth generation X5 which uses a new platform dubbed CLAR that it shares with the 7-Series, X3, X4 and X6 is a very important model for BMW. 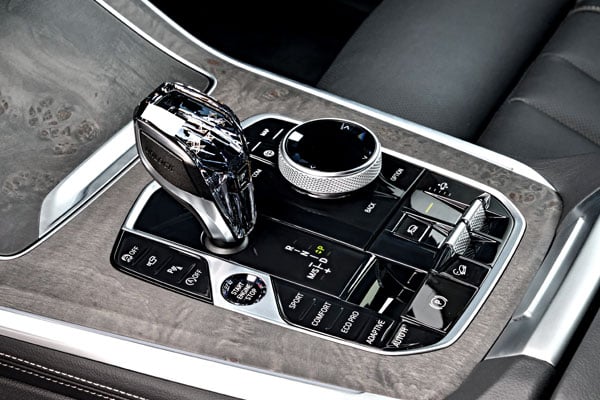 While turbo-diesels dominate the model range in a variety of configurations, a new 462hp V8 engine will also debut in the xDrive50i – the flagship engine for the Middle East.

There’s also a petrol inline six under the hood of the xDrive40i that develops a noteworthy 340bhp while the other four engines are diesel, which sadly we won’t see.

As soon as you step inside the new X5, you immediately notice the extra room afforded by the new platform. There’s more headroom as well as knee and shoulder room. Its wheelbase has now been stretched by 42mm while the overall length has also grown by 36mm, apart from it being 66mm wider and 19mm taller.

During the time the third generation X5 was in showrooms, BMW’s competitors lifted their game and left the previous X5 behind in the tech race. This new version has rectified that with a host of driver aids including driving assistant professional for traffic jams, lane keeping, steering assist and automatic speed control.

It also now comes with self- parking a reverse assist, while a new pair of laser headlights nearly double the previous car’s casting distance, reaching 500m.

Probably the biggest improvement though comes from its off-roading ability, as the previous X5s were never known for their strong capability away from the tarmac. BMW now offers an off-road pack, which consists of a separate button on the centre console that gives the driver the choice of sand, rock, gravel or snow driving modes allowing them to activate the ideal ride height. The throttle response and mapping of the eight-speed automatic transmission are also altered to suit each mode. 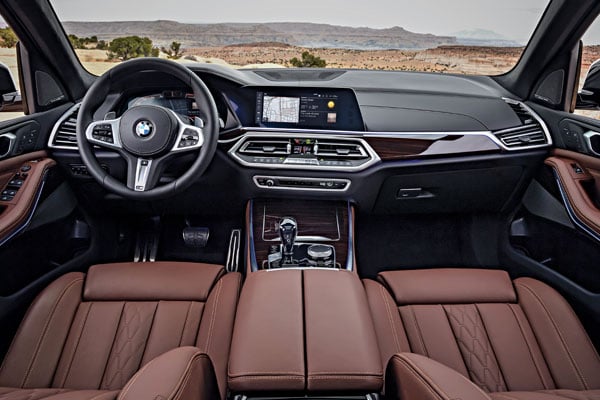 Our off-roading consisted of mud and steep hills with some sideslip. The vehicle managed to send power to the correct wheel so as not to be buried in wheel spin while the increased ride height helped over steep ruts. The hill descent control removed any fears of the slippery downhill descents on the muddy trails. The package also includes guard protection under the car and a new two-axle air suspension that offers ride height adjustment of up to 80mm, raising its wading depth to 540mm with active four-wheel steering and active roll stabilisation. Alternatively, when in sport mode or driving above 138kph, the ride height drops by 20mm.

The two-axle system allows the front to operate independently so that, for example, if it detects a flat tyre at speed, it will alter the ride height on that wheel only to reduce damage to that deflated tyre. The X5 now consists of two versions with the off-road oriented xLine and the sports- focused M-Sport.

The xLine features additional aluminium highlights in the now comically oversized kidney-shaped grille, roof rails and brushed alloy side window trim while the M-Sport is differentiated by a unique wheel arch and bumper trim as well as body-coloured side skirts.

Extra-large air intakes at the front give the M-Sport a more muscular look while the grille, roof rails, side window surrounds and other trims are painted in high-gloss black and, of course, it features a fruity exhaust. The M-Sport will also be the first BMW to offer 22-inch rims as an option. Inside and everywhere you look, it’s all new with multifunction seats offering several tempting massage functions, four-zone automatic climate control, heated armrests along with heated and cooled cup holders. 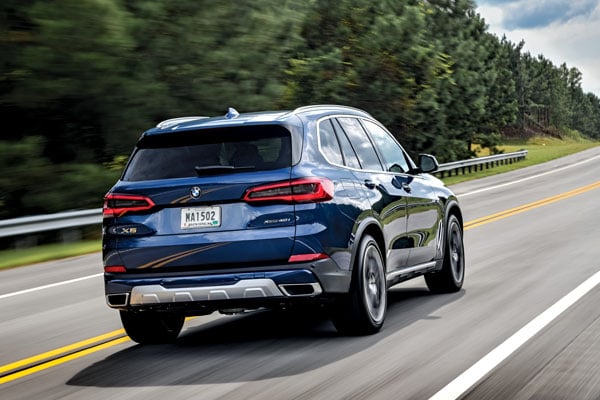 The rear seats get 2 x 10.2- inch touchscreens from December and a third row seat will also be available at the end of the year. A giant panoramic glass roof is 23 per cent larger and features more than 15,000 illuminated patterns while the driver gets a third generation heads up display with a larger 7 x 3.5-inch screen and clearer graphics bouncing off the windscreen.

The centre screen in the front is now 12.3-inches in size while the traditional round dials in the dash have been replaced with a second 12.3-inch LCD display. For those who love their music, Bowers & Wilkins have installed an outstanding 20-speaker, 1,500-watt audio system that will also hit showrooms at end-2018.

The 650-litre boot capacity expands to 1860 litres when the seats are folded flat and thankfully BMW has kept the two-piece split tailgate which is now both electric and remotely operated.