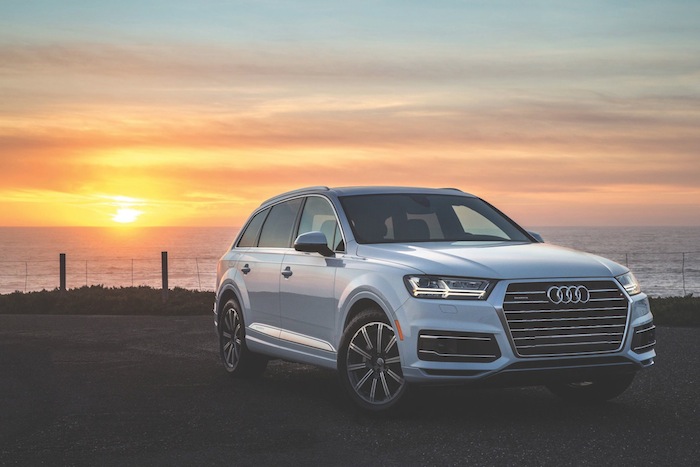 n this line of work you are constantly striving to find a car’s limits but I never thought that deliberately driving into a potential head-on collision would be encouraged.

An instructor from Audi was behind the wheel of the new Q7 sports utility vehicle with me in the passenger’s seat. Ahead was another car waiting for the flash of headlights to signal the start of a real-world demonstration.

Heading off at a moderate 35kmh, the two cars in opposing lanes drove towards each other and our Q7 began to veer into the other car’s path.

It was time to shut the eyes and pray.

Then, in an instant, the brakes jammed on and the car gave a sudden jolt saving us from an imminent crash. My heart rate was up as Audi’s pre-sense driver assist system kicked in and took control of the driving duties. At the same time, it rolled up the windows and closed the sunroof.

The Dhs 275,000 vehicle is the thin end of the wedge for what will become automated driving. And it carries a swag of new automated safety goodies that will trickle down into other new Audi models.

How about parking by itself? Yes it does that whether it is parallel parking or nose in. It will literally drive itself into and out of the spot. And if it is parallel parking and you open the door onto the street, it will also look out for you. Warning lights on the door mirrors as well as the full length of the interior door trim light up if you attempt to open the door as a car passes by. It can also reverse park a trailer, brake, accelerate and steer itself at up to 60kmh in traffic and cook you breakfast. One of those is a lie.

The Q7 is an important model for the company, given motorists’ continuing love for sports utility vehicles. Put this second generation version even more so. It debuts the Volkswagen Group’s new platform underpinning the next generation of Porsche Cayenne, VW Touareg and the all new Bentley Bentayga SUV. It will also be the basis for every front-engined Audi from the A4 sedan up.

The vehicle continues the new design direction debuted on the TT with its huge three dimensional grille flanked by LED headlights. And it has been on a stern diet, dropping 325kgs over the old model.

Despite this, the designers have done a great job of making the new model seem bigger in every way. The wide-set rear exhausts and wrap-around taillights give the impression of scale, even if in reality it is a tad narrower and shorter than the old model.

Inside, there is a minimalist dash design and materials that look and feel expensive. The high definition eight-inch pop up screen in the centre of the dash displays the navigation system while an optional 12.3-inch ‘virtual cockpit’ digital display replaces a set of analogue dials.

Both are controlled via a touchpad and control wheel reducing the number of buttons required on the console.

Audi has decided to drop the V8 engine options for the Middle East, which might seem a little short sighted. But the reality is that the new supercharged, three-litre V6 more than covers the gap. When combined with the eight-speed automatic transmission, it was stonkingly good on some steep and windy mountain passes during our test. The seven-seater version can go 0 to 100kmh in 6.3 seconds (6.1 for the fiveseater) and it has a governed top speed of 250kmh.

The new Q7 is not about traversing the rough and tough wilderness. Audi knows its buyers. But it is an all-round, versatile family car that is loaded to the rafters with intelligent safety oriented technology and a fuel-efficient yet powerful engine. All this with perhaps the best in-car audio system I have heard in years makes it the definitive thinking man’s SUV.