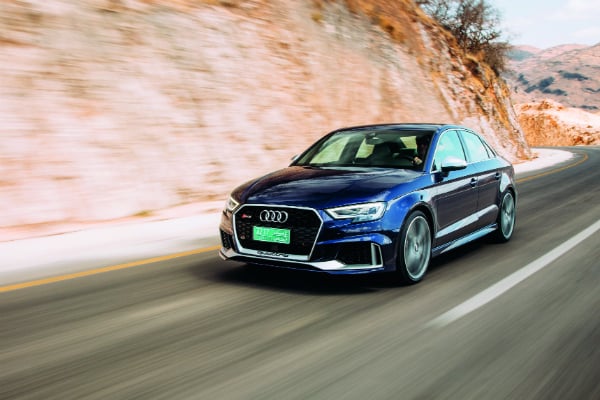 To some, the Gulf Cooperation Council seemed an odd choice of location for the global launch of Audi’s RS3.

Perceived by the uninformed as having endless straight roads and non-stop sand dunes, the region was deemed lacking the appropriate challenges for the 400bhp, turbocharged, five-cylinder, all-wheel drive car.

But with the car’s raison d’etre being all about its handling, traction and snappy performance, the beachside resort town of Salalah in Oman proved more than taxing enough as we put the vehicle through its paces.

Edging against the dramatic Dhofar Mountains, which rise 2,500 metres from the coast with a series of enticing yet slippery switchback roads, the RS3 was in its element as we sprinted towards the clouds.

While snow is never a problem here, the roads can still get slippery, giving the car a similar challenge to deal with on ascents and descents.

It’s good to know the RS3’s Quattro all-wheel drive system – which sends most of its torque to the rear wheels – could react in milliseconds of the tail breaking away and transfer its power to the front wheels. This allowed it to scramble out of tight uphill corners as well as rein in the wayward rear on the downhill turns when there was near zero grip.

Our test car was also fitted with the optional 370mm carbon-ceramic brake discs with eight piston callipers on the front, while maintaining the regular cast-iron rotors on the rear. They were given a proper workout on the long, steep descents back into town, without any signs of fading or needing to manually change back gears.

The box is VW’s trusty seven-speed dual clutch auto with paddle shifts and unfortunately for those seeking more interaction with their car, there’s no option of a conventional manual.

Much of the RS3’s appeal comes from the sensory invasion you get not only when punting around the hills, but before you even set off, with a deliberate nod to the company’s halcyon days of Group B rallying.

Firing it up returns a rapidfire cackle from the twin pipes and with it, that distinctive turbocharged, five-cylinder bark so reminiscent from those old rally days.

The 2.5-litre, inline five engine in the RS3 not only gains an extra 33bhp, taking it to 400bhp with 480Nm of torque, but also uses the new all-alloy block from the TT RS along with a light-alloy crankcase to cut 26kg from its front axle overhang.

In essence, this provides a massive improvement to the feel of the front as you push on, wiping out most of the previous generation’s under steer.

When it’s allowed to wind out to its 7,200rpm redline, the engine’s distinctive song is an aural delight – even sounding a bit like its V10-powered R8 big brother. When it’s on song, it passes 100kmh in just 4.1 seconds and tops out at an unrestricted 280kmh.

In what is a familiar but successful formula for Audi’s RS interior package, minimal changes have been made to the A3’s cabin. The noticeable differences are the suede door trim inserts and diamond-quilted leather seats, while the sports wheel follows the Porsche trend of having the buttons floating off the wheel within reach of the thumbs.

Externally, the sheet metal remains largely unchanged except for marginally wider front guards to house the 20mm wider front track. It looks sleeker and fatter at the same time due to large sill extensions, a rear bumper valance that houses the oval pipes and giant air intakes below the bumper.

If tail-out shenanigans from a Euro sports saloon take your fancy, then stick to the BMW M2. But if it’s a competent all-wheel drive mountain hugger that pumps out more horsepower than the Mercedes AMG A45, then the Dhs225,000 Audi RS3 is well worth a look.