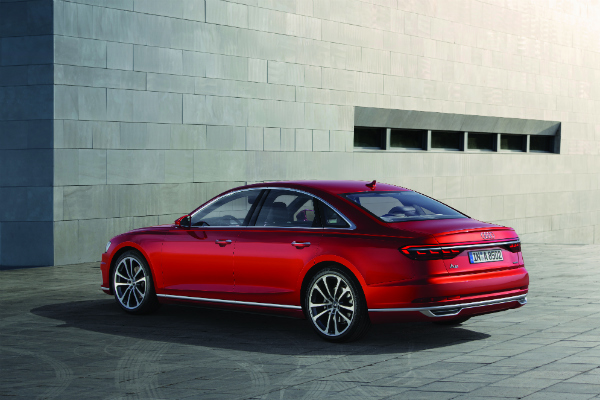 To the authorities around the world who have demanded autonomous cars from the auto industry: the ball is in your court.

Audi claims its new A8 is the first production car developed for conditionally automated driving, which is level three of the five steps the industry is taking towards driverless cars. Unfortunately, however, you won’t be able to use it anytime soon.

Audi has delivered with features like traffic jam pilot and garage pilot that are standard on the new A8, and while the technology is installed and ready to use, government legislators around the world are still deciding on how best to implement it on public roads.

Level three is the point at which the manufacturer takes over liability from the driver for the car’s actions, heralding a minefield of legalities yet to be signed off by regulators.

Garage pilot allows the driver to park the car via their smartphone. It reads the surroundings so it can motor itself in and out of tight spaces without needing a driver. Traffic jam pilot takes control in slow-moving traffic on motorways by managing the acceleration, steering and braking.

The driver is free to focus on other things like watching TV or checking the web – one example of how current road laws need to be adapted to accommodate the new technology.

In the meantime, we still get plenty of high-tech wizardry in the new flagship model that will come with the choice of a three-litre, petrol mild hybrid V6 and a four-litre, twin-turbo V8.

The mild hybrid lets the car cruise for up to 40 seconds without the engine running at between 55kmh and 160kmh. As soon as the driver steps on the accelerator, the 48-volt system starts the engine again.

Our test car was the four-litre, twin-turbo V8 long-wheelbase, which produces 460bhp and 602Nm.

Like all A8s, it runs through an eight-speed auto transmission and Audi’s Quattro all-wheel drive platform. Despite weighing two tonnes, Audi claims it gets to 100kmh in 4.7 seconds and tops out at 275kmh.

The interior is more like a spacious lounge than a car, being substantially longer than the previous model while the long wheelbase A8 L (at 5.3m) comes with four adjustment options including a footrest where passengers can warm and massage their feet.

It’s styling is not a huge departure, though the coupé-like roofline and rear is more adventurous incorporating a full-width LED display across the tail.

Look underneath however and it’s a technological tour de force that promises a velvety ride for rear seat passengers.

As a passenger, aside from the copious legroom it offered, the use of active suspension that adjusts itself via electric actuators that operate each wheel independently kept the ride flat over bumps and rough surfaces.

Front-mounted cameras read the road ahead 18 times a second and make split-second adjustments to the suspension before the wheel reaches the obstacle. The result is a freakish sensation – flattening speed humps and manhole covers as if they didn’t exist.

The suspension is also called upon to reduce the impact of side-on collisions above 25kmh. As it detects an imminent crash, it raises the facing side by 80mm within half a second to deflect the hit. This is expected to reduce injuries to the chest and abdominal areas by up to 50 per cent.

On twisty mountain roads the A8’s four-wheel steering made the car feel half its size as it negotiated bends more like a hot hatch than a large, luxury cruiser. While the rear wheels steer in parallel to the front at speed, at parking pace, they turn in an opposing direction, which gives the big A8 a turning radius in line with Audi’s smaller A4.

The new A8 should land in showrooms by the second half of the year with the traditional 6-litre W12 flagship arriving later but the bulk of orders are expected to come from the four-litre A8L at around Dhs390,000.