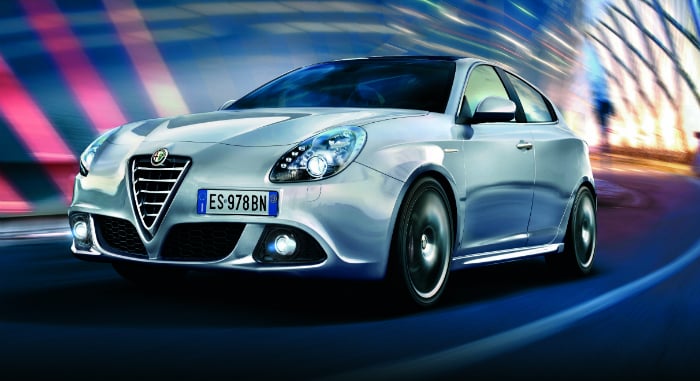 Only the Italians could make a practical family hatchback look as good as the Giulietta.

Taking on the more technically precise VW Golf GTI in the increasingly heated hot hatch sector, the Giulietta looks more like a sport coupe than something which comfortably fits the kids and your weekly shopping or golf clubs.

That’s largely thanks to the concealed rear door handles as well as the typically Alfa Romeo front end with its elaborate contours and unique radiator grill.

Inside, the Italian flair continues with a sweeping metallic finish on the passenger side of the dash although compromising for practicality; the driver’s armrest hovers over the handbrake, making operation of the traditional lever difficult.

The driver and passenger seats are comfy if slightly limited on options. Three fully-grown adults in the back would find things a bit cramped with leg space an issue, but two with the armrest down brings a comfortable and luxurious ride. Three children is no problem while the boot is surprisingly deep.

The air conditioning unit works well though its modern switches seem out of place alongside a rather fiddly and laborious operating system for the radio and entertainment.

A 6.9-inch foldaway display screen on top of the dash shows trip information, though it’s not clear or exciting enough to hold your attention and can quite easily be ignored. This system has been updated for the 2014 model.

The Giulietta comes with a 1.4 TB MultiAir engine, which is where a few issues arise. Due to a chronic turbo lag nothing much happens until you hit 3,000 rpm and when the first of the 170 horses finally do kick in, there is torque under steering.

That can be good fun when you’re in a tail-heavy V8 muscle car. But in a hatchback that eventually goes from 0-100 km/h in almost eight seconds it’s simply annoying.

The Giulietta comes with DNA – a three choice driving mode system: dynamic, natural and all weather. I’ll save you time now should you ever drive one – put it in dynamic and leave it there (unless you’re in adverse weather conditions, then maybe switch to all weather).

Driving in ‘natural’ was simply underwhelming. The problem is once the revs drop below 3,000 you struggle to get any urgency from the engine.

The car gives a smooth motorway ride, but when I had to put my foot flat down on the accelerator when already travelling 100 km/h to get out of a tight situation, there was zero response.

Driving in ‘dynamic’ certainly gave the car a more sporty performance with torque increasing to 250 Nm. But even then keeping the revs high was essential to guarantee any off the line speed.

Alfa has used a twin clutch transmission on the Giulietta which works well once in third gear and above. In slow, stop-start traffic however it is painfully lumpy and jolty. Navigating a busy Mall of the Emirates car park on a Saturday was not an enjoyable experience.

Added to the woe is the Giulietta’s Start & Stop system. Whilst the technology has become increasingly frequent in today’s cars I’m yet to be convinced by it and my time with the Giulietta’s version thoroughly knocked my confidence.

The problem is once the engine has switched off the ‘start’ is far too slow. Maybe the engine shuts down more than other models and is therefore more ‘green’. If that is the case then fair play to Alfa.

On Dubai’s roads however, where you get honked if you don’t pull away at the lights like Sebastian Vettel, it was just not quick enough. My advice: switch it off as soon as you step inside and recycle your plastic bottles to ease your conscience.