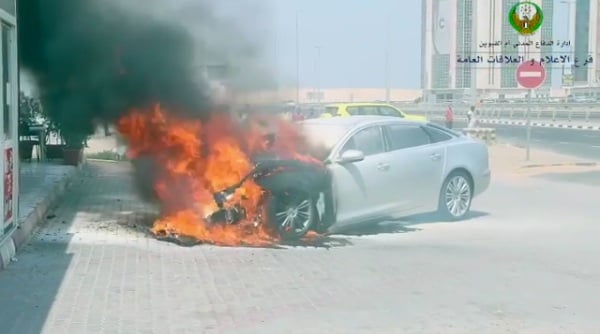 A car burst into flames in Umm Al Quwain on Wednesday, allegedly due to the extreme heat, it was reported.

The car caught fire at about 10.30am, when it was parked outside a building.

Firefighters rushed to the scene and extinguished the fire out before it spread to nearby shops.

Officials confirmed that no one was injured in the incident.

Col. Hassan bin Sarm, director of the UAQ Civil Defence Department said all the nearby shops were evacuated.

He also urged drivers to undertake regular maintenance checks for potential oil and fuel leaks to their vehicles, particularly during the summer months, to ensure their safety. These are likely to contribute to instances of spontaneous engine combustion.

The incident is not the first – according to reports, this is the seventh vehicle to catch fire due to the heat in recent weeks.

Temperatures in the UAE have already crossed 50 degrees several times so far this summer.

Also read: Revealed: The highest temperatures ever witnessed in the GCC