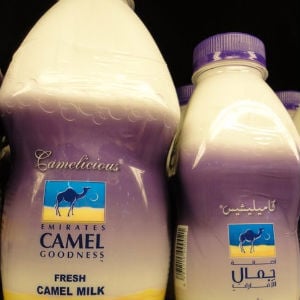 Consumption of camel milk in the region has grown 20 per cent every year for the last six years, according to a local provider, and is set to overtake cow milk’s dominance in the industry.

Speaking exclusively to Gulf Business, Mutasher Awad Al Badry, deputy general manager at Emirates Industry for Camel Milk and Products (EICMP) explained that he expects camel milk to expand not just on the drinks front, but in other sectors too.

“We have seen sales growth of 15 to 20 per cent year on year since we started in 2006 and we’re expecting that to increase as we continue to expand in the region and globally. Currently, in the Middle East, demand is outgrowing our production,” said Al Badry.

“We’re not just exporting milk but we’re also turning to cosmetic products; face creams, as well as our chocolate, ice cream and we’re soon launching a cheese product that will be of a very high quality.”

EICMP, which produces the well-known camel milk brand Camelicious and the Al Nassma chocolate bar, is in the process of receiving its licence from the EU to export its products to Europe.

Al Badry claims that once the commission is through, they will begin implementing logistics for the European roll out later this year, before appearing on consumer shelves in 2013. Al Badry also revealed they are receiving large demand from Malaysia, Australia and Africa.

As well as Camelicious and Al Nassma, Al Badry revealed EICMP is in the process of finalising a deal with a French cosmetic company to use camel milk in a new range of beauty products. The company already has an exclusive brand of camel milk ice cream available in selected stores and will soon roll out its first cheese brand, which Al Badry promises to be rich both in taste and cost.

Camel milk has been well documented as containing three times as much vitamin C as cow milk, being high in vitamins, low in fat and rich in unsaturated fatty acids.