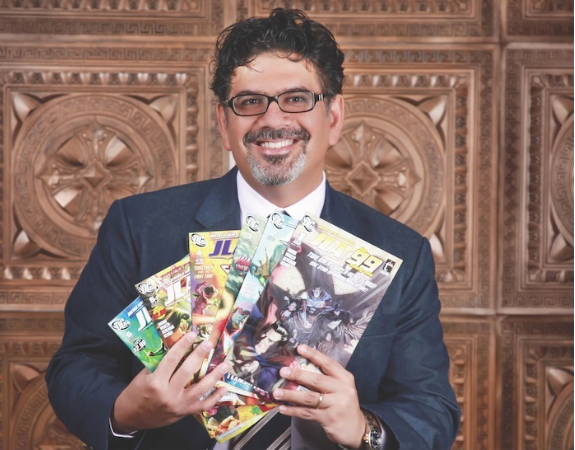 Businesses in the Gulf Cooperation Council must bear the responsibility of developing young leaders, according to Kuwaiti serial entrepreneur Naif Al Mutawa.

Speaking to Gulf Business ahead of his speech at the Young Presidents’ Organisation’s YPO Edge event in Dubai, the clinical psychologist – renowned for his comic book series The 99 – said that companies must be aware of the example they are setting for future business leaders.

“All businesses can be role models but the question is what are they modelling?

“Are they modelling a business that operates on the taking of bribes or a transparent business? There are different models that they are putting across but all of them are educating the leaders of tomorrow,” he said.

“There’s a big responsibility here and businesses need to be aware of that. If we can’t find good role models, we can’t create the future we want.”

An advocate of creative entrepreneurship, Al Mutawa added that aspiring business leaders in the Gulf should take inspiration from Vice President and Prime Minister of the United Arab Emirates and Ruler of Dubai, His Highness Sheikh Mohammed bin Rashid Al Maktoum.

“I’m a big fan of Sheikh Mohammed. He’s an example of a leader that has a plan that goes beyond immediate circles, whether political, economic or whatever area it may be,” he said.

“In Kuwait, the idea is that all the people are trying to get a piece of the pie and not thinking ‘let’s create more pies’. Dubai is creating more pies.

“You need to look beyond what exists. There is a big opportunity to create something new.”

Having been both lauded and criticised for The 99, a superhero cartoon rooted in Islamic principles and virtues, Al Mutawa has survived death threats, fatwas, and a trial for heresy in his home country, despite the comic being approved by the ministries of information in Kuwait and Saudi Arabia.

“There has been nothing new since 2013 but we are ready to start again if the investment is there,” he said of the graphic novel. “I’ve been dragged through the mud in many different ways, but I’m good to go again if somebody can get behind The 99. I believe in what I did.”