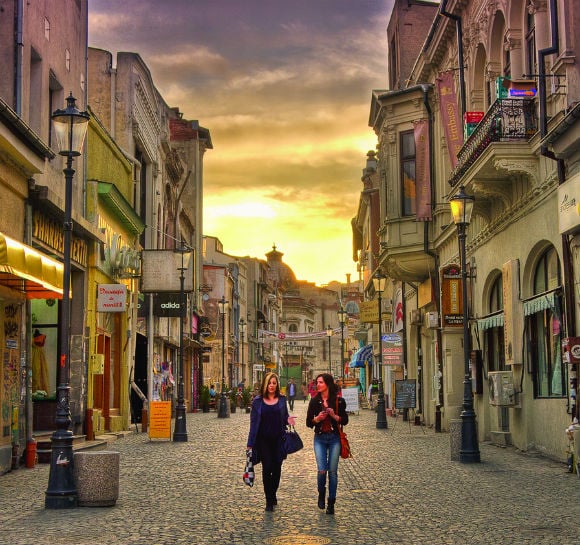 Still hungover from its communist era past, Romania’s capital city is shabby around the edges, poor and often disgruntled, yet it has been rediscovering its joie de vivre over the past few years thanks to EU investment, redevelopment and a native creative flair that has occasionally been the envy of Europe.

In many ways Bucharest is simply now like any other European city, replete with cafes, art galleries, trendy restaurants and all the trappings of cosmopolitan living. Yet it is a city in transition.

It is a hodgepodge of communist era tower blocks, medieval churches and the remnants of a neo- classical heyday, but having neglected and brutalised its heritage for so long during the reign of Ceausescu, Bucharest is doing its best to revive it.

Lipscani, the city’s rejuvenated heart, is evidence of this revival. Once as decrepit as much as the rest of the city, it has been almost fully restored, with pedestrianised cobbled streets, baroque architecture and much of the city’s nightlife found along its streets. If there is a remaining piece of the ‘Little Paris’ that Bucharest once was, Lipscani is it.

Since flydubai launched services to the city in October last year, the delights of Lipscani and the grandiose oddities that comprise the city’s communist past are more accessible than ever. Amongst them are Ceausescu’s Palace and its 1,100 rooms set over 330,000sq m. It is absurd and marvelous at the same time, as is much of Romania.

When I first visited the city almost 20 years ago, Bucharest featured consistently on travel warning lists, with its main train station, Gare du Nord, home to thieves, pickpockets and vagabonds. Outside, the remnants of the city’s past struggled to survive alongside its embattled inhabitants. Those warning have all but gone, although much of the country remains as poor as it always was.

If you use Bucharest as a gateway to Romania’s rural heartlands and stray off the well-worn tourist trail, you’ll see for yourself. Undeniably folkloric, eternally superstitious and often rustic to the core, Romania offers a glimpse of Europe as it once was.

Traditional rural life is evident in much of the country, especially in Transylvania and Maramures, with the Carpathian Mountains one of Europe’s true remaining wildernesses.

If you do decide to head north, take a circuitous route from Bucharest, heading north to Sinaia, Brasov and Sighisoara, before looping round to the left and taking in Sibiu on your return to the capital. Only then will you discover what a diverse and beautiful country Romania really is.