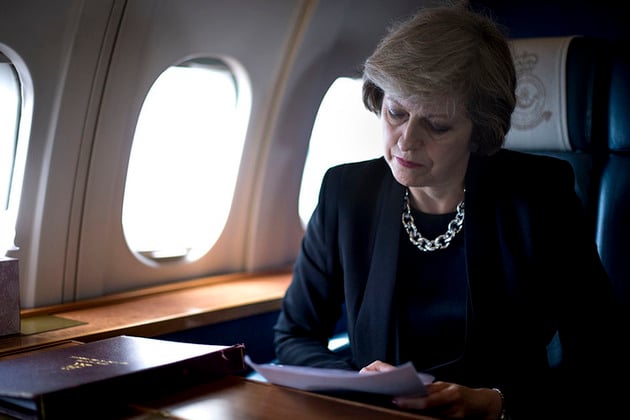 British Prime Minister Theresa May will be seeking to enhance UK-Gulf trade ties as she becomes the first UK leader to attend the Gulf Cooperation Council Summit, taking place in Bahrain on Tuesday.

May will join regional leaders including Saudi Arabia’s King Salman, who is on a regional tour this week that started in the UAE.

She will be the first woman to attend a GCC summit, according to a statement on the UK government website.

During the two-day visit May will “scope out the possibilities for ambitious new free trade arrangements between the UK and the Gulf once the UK has left the EU” following the Brexit vote earlier this year.

“Beyond this, any free trade arrangement between the UK and the Gulf could unlock significantly more trade and would be the first regional approach that the UK has explored since deciding to leave the EU,” the statement read.

The UK has identified GBP30bn ($38.2bn) of high-value opportunities for British businesses across 15 different sectors in the region over the next five years.

Among the announcements during the visit will be a new agreement allowing British businesses to obtain five-year multiple entry visas for Saudi Arabia.

May will also confirm the UK’s participation in Dubai Expo 2020 and meet with senior Gulf investors to underline that Britain remains “open for business”.

“The Gulf is already our largest investor and our second biggest non-European export market and I think there is huge potential to expand this relationship in the years ahead,” May was quoted as saying.

The summit is expected to include discussion on events and developments in the region including the wars in Syria, Yemen and Iraq and perceived interference by Iran.