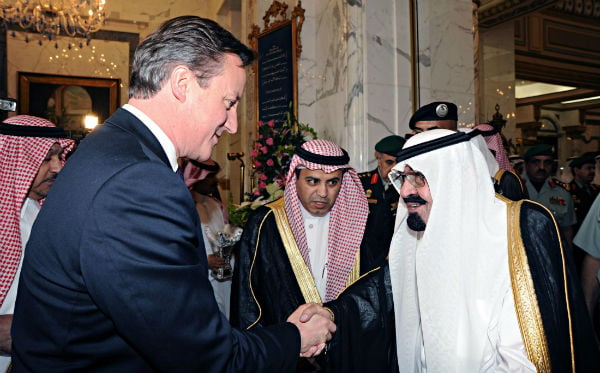 The two leaders met in Jeddah on Tuesday along with several other top Saudi officials and discussed ‘boosting cooperation in various fields’ and ‘regional and international developments, mainly the Palestinian issue and the situation in Syria’ according to state news agency SPA.

Cameron is on an official visit to the GCC having earlier secured a defense partnership with the UAE after a two day visit to the emirates. Both countries’ official statements said they had agreed on a range of defence and bilateral partnerships.

“We will work together to…deepen our defence ties by; continuing the development of our joint plans for the security of the UAE and wider Gulf region; increasing our joint exercises and training; and by investing in the British military presence in the UAE,” said the statement from Downing Street.

A defence industrial partnership was also agreed which will focus on the sale of Typhoon fighter jets to the Gulf country.

Speaking to Reuters, a British defence source said on Wednesday that Britain had made ‘extremely encouraging’ progress in securing an order for 60 Typhoon aircraft from the UAE. The jets are made by BAE Systems.

“There is a political agreement. Clearly there are a lot of details to be worked through, but it is extremely encouraging,” the source told Reuters on condition of anonymity.

The deal echoes that of a similar trade between Saudi and Britain in 2007, when the Kingdom bought 72 Typhoons in a deal thought to be worth $7 billion.