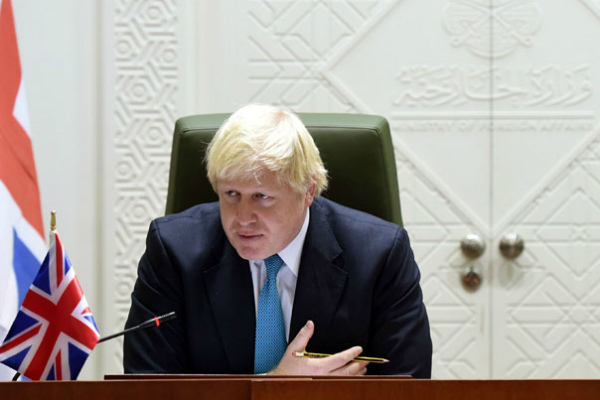 British foreign secretary Boris Johnson quipped on Tuesday that Libya can become a new Dubai if it can clear the dead bodies away, the latest gaffe by Britain’s top diplomat.

Johnson, who has offended some allies with flippant remarks, told Conservative Party members that the Libyan city of Sirte could be turned into the next Dubai by British investors if they could clear the bodies.

“They’ve got a brilliant vision to turn Sirte, with the help of the municipality of Sirte, to turn it into the next Dubai,” Johnson said. “The only thing they’ve got to do is clear the dead bodies away and then we will be there.”

Some activists from Prime Minister Theresa May’s party laughed at the joke before the chair of the event changed the subject, saying: “Next question.”

Britain and France took a leading role in the attacks that helped rebels overthrow Muammar Gaddafi in 2011. The country has since descended into chaos, with thousands of casualties.

The Islamic State militant group took over Sirte in early 2015, turning it into their most important base outside the Middle East and attracting large numbers of foreign fighters into the city. It was later cleared of the militants.

In a series of late night posts on Twitter, Johnson said he was referring to the clearing of booby trapped bodies of Islamic State militant fighters.

“Shame people with no knowledge or understanding of Libya want to play politics with the appallingly dangerous reality in Sirte,” Johnson said. “The reality there is that the clearing of corpses of Daesh fighters has been made much more difficult by IEDs and booby traps.”

When asked about Johnson’s comments, PM May’s deputy, Damian Green, said all ministers need to be careful with their language when dealing with sensitive issues but refrained from criticising the foreign minister.

The opposition Labour Party’s spokeswoman for foreign affairs, Emily Thornberry, said Johnson’s joke was shameful and questioned whether May would take any action to reprimand him.

May’s appointment of Johnson, who in the run-up to Britain’s referendum on EU membership compared the goals of the European Union to those of Adolf Hitler and Napoleon, caused consternation in some European capitals.

Britain’s ambassador to Myanmar was forced to interrupt Johnson earlier this year as he tried to recite a nostalgic colonial poem by Rudyard Kipling in public during a visit to the country’s most famous Buddhist site.