Brent Drops Below $100 For First Time Since July - Gulf Business 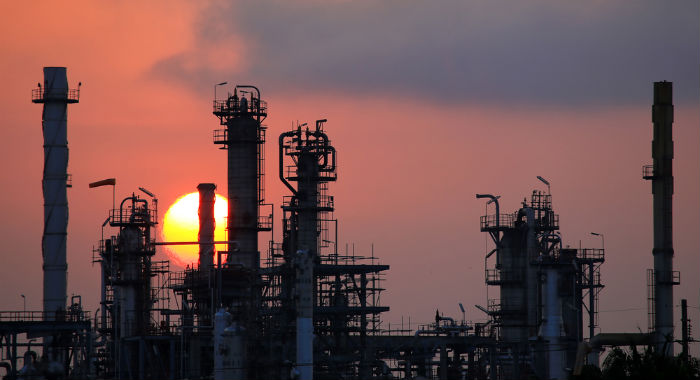 Brent crude sank below $100 a barrel for the first time in nine months on Tuesday amid a wider commodities rout, with investors making a beeline for the exits after recent weak data from China and the United States fuelled worries about oil demand.

A dismal global economic outlook dragged gold down to a more than two-year low and shaved over $2 off oil prices earlier in the session. While commodities recouped some of the losses later in the day, shaky investor sentiment kept a lid on prices.

US crude for May delivery fell 89 cents to $87.82 a barrel, after hitting a low of $86.06 – its weakest since December 2012. The prices were set for their longest losing streak also since December.

“Fundamentals were not strong at the start of the year but yet (investors) focused on all the bullishness in the market. But as the year went on, it got steadily more bearish and I think (the China data) was the final nail in the coffin,” said Tony Nunan, an oil risk manager at Mitsubishi Corp in Tokyo.

“Europe is a mess and that was a foregone conclusion, then we got the poor non-farm numbers and that took away all the optimism off the US economy and now with China not growing as fast as people thought, everybody is turning bearish.”

Moody’s Investors Service affirmed China’s government’s bond rating of Aa3 but cut the outlook to stable from positive, the second pessimistic revision by a foreign ratings agency this month.

Oil prices slipped about three per cent on Monday after data showed economic growth in the world’s No.2 oil consumer China unexpectedly slowed in the first three months of 2013.

This rattled oil markets already spooked by forecasts for lower global oil demand growth for 2013 released last week by the International Energy Agency, the US Energy Information Administration and the Organization of Petroleum Exporting Countries.

China’s implied oil demand fell to its lowest in seven months in March, while crude oil stockpiles in the United States have ballooned to a 30-year high as domestic output surges.

Adding to the gloom was a US regional manufacturing report showing the pace of growth slowed more than expected in April, and data showing US homebuilder sentiment waned for the third month in a row in April.

This comes on the heels of last week’s bleak retail sales data and suggests the world’s largest economy has lost some steam heading into the second quarter.

“US housing data was also weaker than expected, which combined with weaker signs from the labour market is indicative that the headwinds posed from fiscal tightening are starting to make themselves felt in the data,” ANZ analysts wrote in a note on Tuesday.

Punctuating the bearish mood, Goldman Sachs, one of the most influential banks in commodity markets, recommended clients close their bets on rising Brent prices, warning the market could continue to fall.

Reports of two explosions at the finish line of the Boston Marathon killing three people and injuring more than 100 also unnerved investors. Selling in US equities had accelerated late in the session after the news on Monday.

The market was now waiting for weekly oil inventory data from top consumer the United States for trading cues.

A preliminary survey of analysts by Reuters forecast US crude stocks rising by 1.4 million barrels for the week ended April 12. In the previous week, inventories rose slightly to hit the third highest level since records began in 1982, government data from the Energy Information Administration showed.

“For oil, the fundamentals are not strong … the market looks oversupplied so what has to happen is that OPEC has to cut production to shore up the market,” Mitsubishi’s Nunan said.

“I do think there are a lot of supportive factors still in the market. Geopolitical risks are always there and have not disappeared but just are not in the focus now … Once Iranian elections are over in June, then we might have the whole problem with the Iranian nuclear development.”