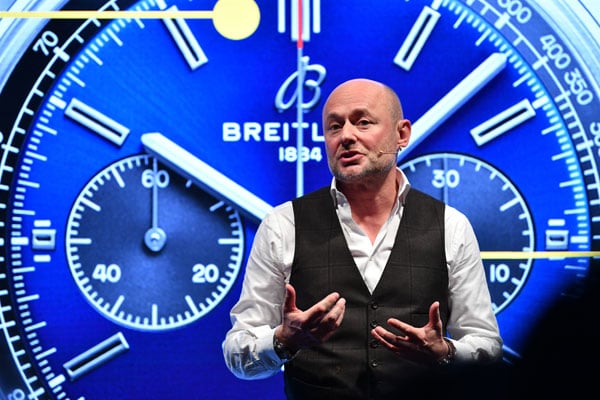 “At Breitling, we are like a huge start-up,” said CEO Georges Kern during an interaction at Spring Studios in London’s Kentish Town at the first-ever Breitling Summit in October.

But before you ask yourself whether it is wise to call a 134-year-old watchmaker a start-up, remember that Kern is a marketing and branding maverick whose every action and statement is deliberate and measured. He led IWC for nearly 15 years as its CEO (during which IWC’s sales reportedly blew up from $40m to $800m), before being promoted to the head of watchmaking for the entire Richemont Group in 2016 from where he subsequently landed at Breitling last year.

“We want to be more relaxed, informal, cooler, younger and fresher than the other brands out there,” he says of his vision for the brand.

To that end, there is a new brand logo where the wings flanking the cursive ‘B’ have been dropped – a logical step when you consider that Breitling sells more diving watches than it does pilot’s watches.

Then there’s the recent #squadonamission marketing initiative that has roped in A-listers like Brad Pitt, Charlize Theron and Adam Driver in a Peter Lindbergh-directed campaign.

On the product development side, Kern explained how he is paring down the number of collections available to make it less confusing to customers and is clubbing them under four segments: Air, Land, Sea and Professional.

Last year Breitling produced 150,000 watches, all of which were COSC-certified. Only 2 per cent of all Swiss watches manufactured receive the stringent COSC certification that attests to the accuracy of the timepiece. The only other brand which has 100 per cent of its production COSC-certified is Rolex.

Kern is also tapping new markets for Breitling, especially in Asia. This included the opening of a flagship in Beijing in July. Explaining the rationale to set up a strong retail presence on the ground in China, he explained, “For every watch sold in China, four are sold to Chinese abroad.”

Breitling’s boutiques themselves will be overhauled to align with the new brand image that’s more retro-chic. The new boutique concept unveiled in Zurich and Paris, and shown to us during the presentation in London, are kitted with a pool table, Norton motorcycle, leather sofas, brick walls and timber floors – a scene borrowed from a ‘loft-style’ apartment in a major metropolis.

Kern has skin in the game. He co-invested along with Europe’s largest private equity firm, CVC Capital Partners, when the latter bought an 80 per cent stake in Breitling in 2017 a few months before Kern came onboard as Breitling’s CEO.

“When you are independent,” explains Kern about Breitling which along with top-tier brands like Audemars Piguet, Rolex and Patek Philippe have not been bought over by a watchmaking conglomerate, “the decision-making process is quick and straight-forward. Investment is a phone call away – that is the beauty of private equity.”

Start-ups by nature are high-risk, volatile, and experimental in their temperament – which is exactly how Kern would prefer to run Breitling. In the brand upheaval that has resulted since he took charge accelerating product development, collapsing a few lines and charting an overall new direction for the brand, is he afraid of upsetting the purists?

“I am not dogmatic, but I do have convictions. I’ve been encountering them [purists] for the last 25 years and if someone is making an intelligent argument, I will listen to them. What I will not do is shift my convictions like the weather vane above a house.”

Here’s a closer look at the four core categories – air, land, sea and professional – across which all new Breitling novelties will be clubbed.

The Navitimer, Breitling’s most emblematic timepiece, is a pilot’s watch, first launched in 1952. It is the only chronograph that has been in non-stop production ever since. Breitling’s connection to aviation goes back even further to 1938, when Willy Breitling set up the Huit Aviation Department that focused on creating pilot’s watches and timing instruments which could be used in the cockpit.

With the onset of World War II, Breitling was commissioned to fit military planes like the British Spitfire planes with cockpit clocks. By the Fifties and Sixties, several commercial airlines including KLM, United Airlines, Lockheed and Convair also began using Breitling clocks in their aircraft.

When the Navitimer made its debut, it was developed in association with the Aircraft Owners and Pilots Association (AOPA). In fact, in those early years of its production, the only way you could get yourself a Navitimer was if you were an actual pilot.

The slide rule function on the watch can be used to calculate vital functions like ground speed, fuel consumptions, and carry out division, multiplication and algorithms too.

We also got a sneak peek of the upcoming Navitimer 8 B01 Curtiss Warhawk special edition which is named after the shark-nosed Curtiss P-40 Warhawk plane that was the third most manufactured warplane during WWII.

The high point of the Breitling Summit was the launch of the Premier collection  of timepieces. “We want to fish in a bigger pond,” said Kern when explaining why he felt it necessary to introduce a collection that went beyond aviation and diving watches.

The Premier line was first introduced in 1943 by Willy Breitling and has now been re-introduced as a collection of dress watches under the Land category.

The fifth model was presented by Christophe Georges, Bentley’s head of marketing and product. The Premier B01 Chronograph 42 Bentley British Racing Green is a continuation of the relationship between Breitling and a Bentley that was first struck in 2003.

The partnership is the longest one between a car manufacturer and watchmaker. Back in the 1930s and 1940s, Willy owned one of the very few Bentleys present in Switzerland back then and would often be seen driving himself from Geneva to La Chaux-de-Fonds.

There are an estimated 640,000 tonnes of discarded fishing nets floating in the oceans around the world. The big news from the Summit was Breitling’s latest collaboration with Outerknown, a sustainable clothing company founded by 11-time world-surfing champion Kelly Slater.

Outerknown does its part to pull those nets out of the ocean and use it to create Econyl–a yarn that is made by recycling nylon waste, a material that fishing nets are most commonly made of.

At the Summit, Breitling showed its first NATO strap that is made from that Econyl. The Superocean Heritage II Chronograph 44 Outerknown is also equipped with a tough shock-resistant unidirectional ceramic bezel.

Bertrand Piccard took to the stage at the Summit to highlight the Professional category of watches from Breitling. This category of watches includes timepieces like the Emergency that comes packing with a distress beacon that can signal for help when its wearer needs to be rescued.

Piccard is an adventurer and a daredevil – he co-piloted the Solar Impulse, the first round-the-world solar-powered flight, a few years ago.

A decade-and-a-half before that, he also co-piloted the Breitling Orbiter which made the first non-stop flight around the world by balloon. “We started the 45,000km journey with 3.7- tonnes of propane, and by the time we finished the flight, we had just 40 kilos left in the tank.”