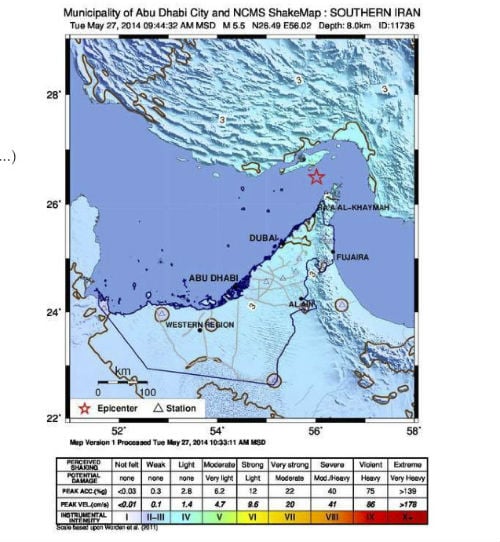 Tremors were felt in Dubai on Tuesday morning, following an earthquake in Iran, officials at UAE’s National Center of Meteorology & Seismology (NCMS) confirmed.

“The seismic network of the National Center of Meteorology and Seismology has recorded an earthquake in southern Iran – Qashem island this morning, Tuesday 27 May 2014, with magnitude 5.1 earthquake on richter scale, at 9:44 am (local time),” a statement said.

“The intensity was 4-5 on Mercalli scale in the northern part of UAE, and it was 120 km north of Ras Al Khaimah,” NCMS said.

Many buildings were evacuated in Dubai and residents took to social media to report the tremor.

Iran is highly prone to earthquakes, and a 6.3 magnitude quake in April last year led to massive tremors across the GCC states.