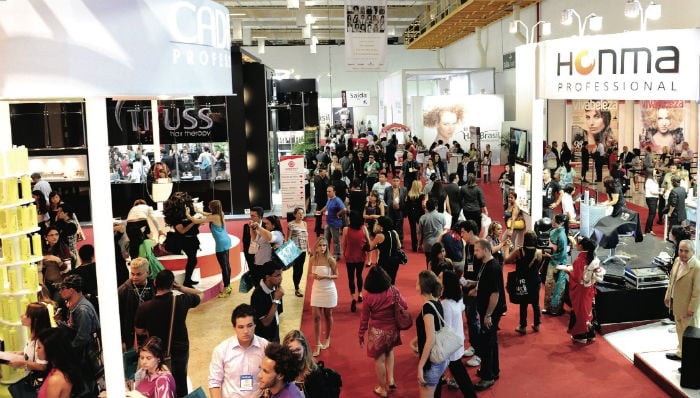 “In Brazil, we like to take three showers a day,” says Joao Carlos Brasilio, the President of the Brazilian Association of the Cosmetic, Toiletry and Fragrance Industry (ABIHPEC), speaking at Hair Brazil, an annual event showcasing hair the cosmetics industry in Brazil’s commercial capital, Sao Paolo.

Outsiders are surprised by the level of care devoted to personal hygiene in Brazil. Women go to great lengths to look after their hair, but men are just as fussy about using the right products.

Huge crowds converge on Hair Brazil 2013, the personal-grooming show that runs from April 6-9 at the Expo Center Norte Pavilions on Rua José Bernardo Pinto, in the Vila Guilherme District of São Paulo. The event is a celebration of Brazilian beauty. The show plays host to 900 exhibitor brands in a huge set of exhibition halls, and some 80,000 visitors attend, including 4,000 trade buyers. The show offers 100 simultaneous events, including workshops, seminars and fashion technique shows.

A key ingredient in the success of Brazil’s cosmetics industry is the sheer diversity of its 200-million plus population. Statistics show that while 48 per cent of its citizens are white, the majority, including 43 per cent multiracial and 7.6 per cent black, are non-white.

Asians and Amerindians make up only 1.5 per cent of the total. As an example of Brazil’s unique welcome, no other country can match the size of Japan’s diaspora in Brazil, and it is said that its expatriate population is so comfortable here, that after one generation, immigrants are in danger of severing ties to the mother country.

The importance of the cosmetics and shampoo industry in Brazil is emphasised in the US Department of Trade’s Brazil Country Commercial Guide, 2012, which shows how the industry has flourished in recent years. Brazil’s cosmetics industry is today thought to be growing at 13 per cent a year. To give an idea of the size of the domestic market, Brazilian per capita spending on personal hygiene is over six times that allocated to expenditure on the indigenous defence industry.

“Hair care products make up the largest segment of the Brazilian cosmetics and toiletries market,” said the Brazil Country Commercial Guide, 2012. “According to industry reports published by the Brazilian Association of the Cosmetic Toiletry and Fragrance Industry (ABIHPEC), the country is currently ranked as the third most important market in the world for the industry, and the number one market for perfumes and fragrances. Shampoo sales, both imported and locally made, constitute about 50 per cent of domestic sales; they are divided evenly between Brazilian and well-known multinational suppliers,” the guide says.

Brazil’s domestic shampoo and cosmetics markets are so successful, that industry association efforts to promote exports have met with great difficulty. To give an idea of the current state of play, some $24 billion in revenues is generated by the domestic market, while exports account for only $880 million, or less than 3.5 per cent of local sales.

Nevertheless, ABIHPEC is determined to make inroads in international territory. Although Brazil’s cosmetics, toiletries and fragrances (CT&F) industry comprises 2,300 companies, ABIHPEC’s 350 members comprise 94 per cent of the Brazilian industry’s revenues. Exports are seen as a way to expose the domestic industry to the currents of international technologies, style and ingredients.

The Middle East quickly became a focus, quite apart from the success enjoyed in Dubai, which is now a main distribution hub for a number of Brazilian companies.

In 2012, Beautycare Brazil represented 50 per cent of total sector exports to the Middle East, or $4.5 million.

“It’s really important to be in the international market for many reasons: strategy and competition, as well as innovation and technology,” says Gomes.

Apex-Brazil plays a key role in assisting Brazilian companies seeking to expand into international markets. The challenge of dealing with markets that operate outside the Portuguese language is often not appreciated by potential Brazilian exporters. Marketing materials, labelling and support staff are all required to be conversant in other languages, whether English, French, Spanish or Arabic.

Often, Apex officials say, they have to educate local companies on the sheer size of the challenge ahead.

A good example is nuNAAT, the cosmetics and shampoo arm of diversified conglomerate, M Cassab Group. nuNAAT began operations only five years ago, and says it has an export-only focus. After five years of operations, it claims to export to a staggering 72 countries, and enjoys five per cent of M Cassab’s annual revenues of around $600 million. It has distribution hubs in Miami and Dubai, and has made inroads into Russia and Asia, with China and Singapore high on the agenda.

Container cargoes take 65 days from Brazil to Jeddah, and a further 15 days to Dammam. “In the Middle East, Egypt, Saudi Arabia and the UAE are priority markets. Dubai is a global distribution hub,” says Alex Vasto, nuNAAT’s President.

“We started importing and serve major supermarkets in Abu Dhabi and Sharjah. Dubai started six months ago, when we really got into supermarkets in the UAE. There is tough competition in Dubai and we have to build up our distribution channels.”

Clearly, there is no country in the Middle East or Africa that nuNAAT does not consider an export target. Products include a line of shampoos with high keratin content to restore protein in hair or with garlic extract to help restore natural balance.

“Dubai went crazy over product and price. I thought: ‘I have a goldmine here’,” says Vasto. “We stress our Brazilian roots, the beauty of Brazilian women, the Brazilian image. The thick hair of the Middle East is wavier but it need not be harder to manage. In Turkey we are doing extremely well. They use a lot of our products for volume reduction.”

Ask nuNAAT for information on the scope and requirements of the Middle East market, and you will soon find company officials who are knowledgeable about the peculiarities of the local market. Women’s hair in the Middle East is thicker and requires special products for care.

Desalinated water has a tendency to dry out the hair and skin, requiring additional skin and hair care products to enable residents to deal with its consequences.

“Arab women’s hair is thick. Normally it has volume. It traditionally has light weight at the ends. It is not fully wavy, but dense. It is more difficult to control because of its thickness,” says Sintia Martins – head of R&D of M Cassab.

“Arab women are looking for volume reduction and control. But all hair suffers in the hot Middle East climate. Using the veil is not a problem, but care need to be taken if sweat accumulates. Good fabric helps protect the hair. But Middle East hair can become fragile, which causes it to break. We are much more concerned over oiliness than sweat.”

Less than two months after Hair Brazil, the 10 Brazilian companies congregate under the Brazilian flag at Beautyworld Middle East, part of a total Brazilian delegation of 14 concerns. ABIHPEC has a consolidated stand in Hall 6 of the Dubai World Trade Centre. What they can offer the region is variety, quality of ingredients, and value for money.

And it’s clear they are gradually making inroads in the GCC market.

Elizabeth Alves, head of international trade for Brazil’s Kiva, is in Dubai, looking for a new distributor for her skin-whitening products − what’s good for Brazil is also welcome in the Middle East and Africa.

Paulo Kazaks, CEO of Brazil’s Sweet Professional, has his undoubted style cramped in Dubai by a much smaller stand to operate from than in Sao Paolo, but his products have won a place in the heart of the younger audience, for their zest, direct appeal and joie de vivre.

Bashir, who is pushing nuNAAT products into new market Turkey, also runs a business called African Beauty Palace Cosmetics, which concentrated on imports from the US until the Brazilian partnership came about. Bashir has a showroom in Dubai’s Gold Souk. He says he is now running a multi-million dollar business.

“It’s like a marriage. Some days we agree, some days we disagree. It’s a relationship of trust. Amir speaks the language and knows how to do business here,” says Vasto. He says 10 per cent of nuNAAT’s global revenues are generated through Dubai.

Bashir praises the dynamism of nuNAAT: “We have the same vision. We have a very strong future here together in the region. The quality of Brazilian products stands out in the Middle East. The sky’s the limit. Turkey is growing at 30 per cent. Even West Africa, including Cote d’Ivoire, Senegal, Gabon, are on the radar. All of them are served from Dubai. Dubai makes life easier for them. Russia, Azerbaijan, all of them, they come to Dubai.”

As president of ABIHPEC, Joao Carlos Brasilio is under particular pressure to practice what he preaches. He has been involved in the industry since the 1960s, through his own company, local cosmetics firm and soap manufacturer, Perfumaria Rastro Ltda. He heads several domestic trade bodies engaged in the CT&F industry. He will be 70 next year.

“Beauty is for every day. We are going to live longer. Children born now are probably going to live for more than 100 years. Things will become very advanced technologically,” he says. “The bad news is that we’ll have to work longer. We’ll have to wait much longer to collect our pensions, whether public or private. To continue working, your looks are going to be important. If you have a worn-out appearance, you won’t get a job, or will work only sporadically.

“We don’t possess any magic remedies. If you invest to forestall the decaying and aging of the skin, you can obtain good results. In most countries, skin-care is an issue and awareness for women is very important. You collect the fruits later. We have to get society to recognise the reality: ‘I want to live more, but it is quality of life that counts.”