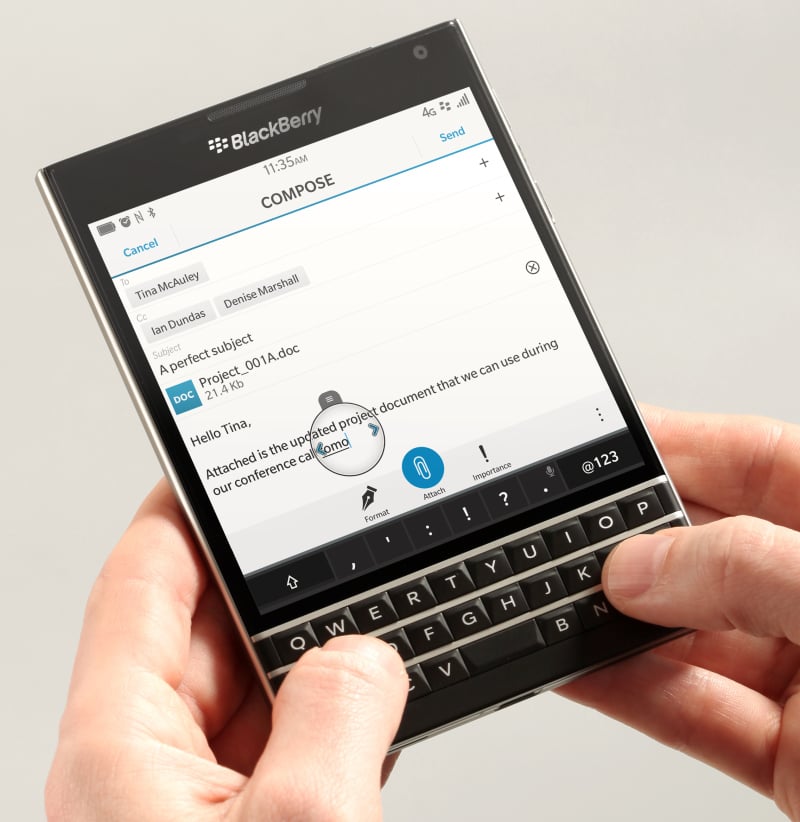 BlackBerry is set to launch an unconventional new smartphone dubbed the Passport on Wednesday, as it embarks on potentially the most critical phase of its long turnaround.

The one-time smartphone industry pioneer recently concluded a three-year long restructuring process and has largely halted the bleed, but it is now up to Chief Executive John Chen to prove that the company’s new devices and services are capable of generating sustainable new streams of revenue and returning it to profitability.

“Their products are certainly pointing toward that and the new strategy makes sense, but there is still a lot of execution risk at this point in a very competitive market.”

BlackBerry is set to launch the Passport early on Wednesday in Toronto, with simultaneous events also being held in London and Dubai.

The launch of the Passport, which boasts a big square screen and a unique touch-sensitive tactile keyboard, will kick off a frenzied spell for Waterloo, Ontario-based BlackBerry. The company is set to report fiscal second-quarter results on Friday and within a couple of months it is also expected to launch the long-awaited BlackBerry Classic, which bears similarities to its once wildly popular Bold smartphone.

“BlackBerry just needs one hit phone for now,” Colello said. “It doesn’t quite matter whether it is the Passport, the Classic or anything else, but they do need one device to jump-start the hardware business again. The big question really is whether any of these devices will kick-start it.”

The company is hoping the Classic and the launch of its new mobile device management system – BlackBerry Enterprise Service 12 (BES12) – will help it claw back ground ceded to rivals in both the hardware and services market.

The BES 12 platform will allow IT managers at large firms and government agencies to not only manage and secure BlackBerry devices, but also all Android, iOS and Windows-based devices on one platform.

Chen, a well-regarded turnaround expert in the tech sector, intends to remain a competitor in the smartphone arena, but is focused on reshaping the company to build on its core strengths in areas like mobile data security and mobile device management.

BlackBerry is betting that the enhanced security features on its BES 12 platform, coupled with a range of value-added services, will help revive revenue growth and stem its slide.

“BES12 is the most important product launch, as it is needed to stem the service revenue decline,” Scotiabank analyst Daniel Chan said in a note to clients on Tuesday.