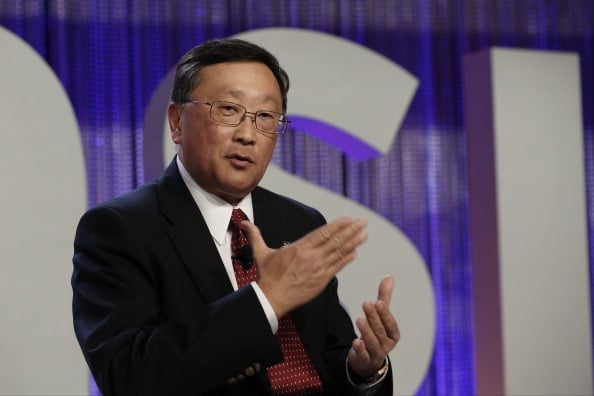 BlackBerry Ltd would consider exiting its handset business if it remains unprofitable, its chief executive officer said on Wednesday, as the technology company looks to expand its corporate reach with investments, acquisitions and partnerships.

“If I cannot make money on handsets, I will not be in the handset business,” John Chen said in an interview, adding that the time frame for such a decision was short. He would not be more specific, but said it should be possible to make money off shipments of as few as 10 million a year.

At its peak, BlackBerry shipped 52.3 million devices in fiscal 2011, while it recorded revenue on less than two million last quarter.

Chen, who took the helm of the struggling company in November, said BlackBerry was also looking to invest in or team up with other companies in regulated industries such as healthcare, and financial and legal services, all of which require highly secure communications.

He said security had become more important to businesses and government since the revelations about U.S. surveillance made by former National Security Agency contractor Edward Snowden.

In a wide ranging interview in New York, Chen acknowledged past management mistakes and said he had a long-term strategy to compliment the short-term goals of staying afloat and stemming customer defections.

“You have to live short term. Maybe the prior management had the luxury to bet the world would come to it. I don’t have the luxury at all. I’m losing money and burning cash.”

In March, the embattled smartphone maker reported a quarterly net loss of $423 million and a 64 per cent drop in its revenues, underscoring the magnitude of the challenge Chen faces in turning around the company.

Chen said BlackBerry remained on track to be cash-flow positive by the end of the current fiscal year, which runs to the end of February 2015, and to return to profit some time in the fiscal year after that.

Chen said his long-term plans for BlackBerry included competing in the burgeoning business of connecting all manner of devices, from kitchen appliances to automotive consoles to smartphones.

Chen said he was not sure how long it would take for the “machine-to-machine” or “M2M” world to become a mainstream business, but he said he was sure that was coming.

Chen, viewed by tech industry insiders as a turnaround artist, wants BlackBerry to zero in on its core base of corporate and government clients, and on its services arm, which secures mobile devices on the internal networks of big clients.

Chen was credited with turning around Sybase Inc in the late 1990s. Sybase, an enterprise software company, was eventually acquired by SAP AG in 2010.

Canada’s BlackBerry, which has lost most of the smartphone market to Apple Inc’s iPhone and gadgets powered by Google Inc’s Android operating system, has laid off about 9,500 employees, or more than half its work force over the last three years, as it has rushed to cut costs in the face of mounting losses.

The company, a one-time pioneer in the smartphone arena, has seen its fortunes fade dramatically within a span of less than five years. BlackBerry, which boasted a global smartphone market share of roughly 20 per cent back in 2009, has since seen that share shrink to less than two per cent as of the end of 2013.

Chen, who joined BlackBerry after it was unable to find a buyer in a sale process last year, said he was not fazed by recent acquisitions of companies offering similar services, such as Facebook Inc’s $19 billion purchase of mobile messaging service Whatsapp.

“We are not going to go up against Whatsapp. We are going to be more focused on secure communications, secure messaging,” he said of BlackBerry’s BBM platform.

Chen said he was determined not to lose focus on the corporate and other customers that helped it build its global reach in the first place, and would not be tempted back into the much larger but more fickle consumer smartphone race.

“We are not going to spend any more money to maintain the latest version of Angry Birds,” Chen said, referring to a wildly popular consumer mobile videogame.