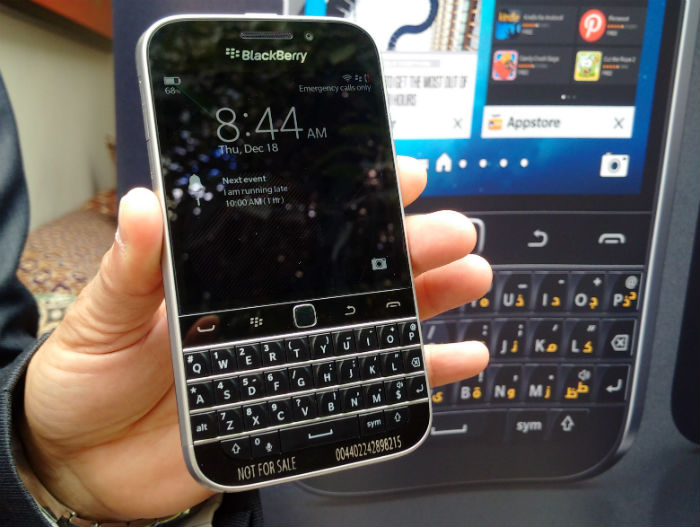 Canadian phonemaker BlackBerry has launched its new ‘Classic’ model in a bid to win back its loyal Bold and Curve phone users, and revealed that the device will be available in the UAE before the end of the year.

The new smartphone looks very similar to the Bold 9900, BlackBerry’s popular product launched in 2011, but comes with an enhanced screen size (60 per cent bigger), longer battery life (up 50 per cent) faster browser and all the latest software updates on BB10.

“We listened closely to our customers’ feedback to ensure we are delivering the technologies to power them through their day – and that feedback led directly to the development of BlackBerry Classic,” said John Chen, executive chairman and CEO at BlackBerry.

The phone comes with a 3.5-inch touch display with 294 dpi HD resolution and the familiar QWERTY keyboard, trackpad and navigation keys.

“A lot of our customers enjoy using the utility belt and missed having it on the Q10,” said Mike Al Mefleh, director, Product Management, Middle East at BlackBerry. “The familiar keys will now allow for easier navigation.”

The BlackBerry Classic comes with a 2515MaH battery and battery optimisation software that will allow 22 hours of active usage, Al Mefleh said. It runs on a 1.5 GHz Qualcomm Snapdragon processor and includes 2GB RAM and 16GB of device storage (expandable by up to 128GB via SD).

The camera has been improved slightly from the Bold 9900 with a 8MP rear-facing camera and a 2MP front camera.

Slightly heavy at 177g, Mefleh said the phone is sturdy and reliable, with the rear designed to provide a good grip.

Launching the device in Dubai’s old-city area, Bastakiya, to provide a ‘classic, heritage’ setting, regional BlackBerry executives emphasised that another key aspect of the smartphone was security.

“With all that’s happening at the moment with relation to hacking, we want to stress that the Classic is safe and secure and will protect users from any privacy breaches, providing encrypted email, web browsing and BBM,” said Chris Corsi, regional sales director at BlackBerry.

He also confirmed that the Classic will be priced at Dhs1,799 in the UAE at launch.

While he did not disclose sales figures for 2014, or current marketshare in the Middle East, he said the company’s previous launch, the wide-shaped Passport, created a lot of buzz in the market.

“There is a lot of scope in the GCC, and the UAE specifically is a booming smartphone market. While a lot of people are already using two devices, there is demand for a keyboard product,” he said.

The company will be heavily marketing the new Classic in the region, primarily targeting BlackBerry loyalists, but also business and enterprise users.

“Our focus going ahead is on the mid to high-end price smartphone segment,” added Corsi.