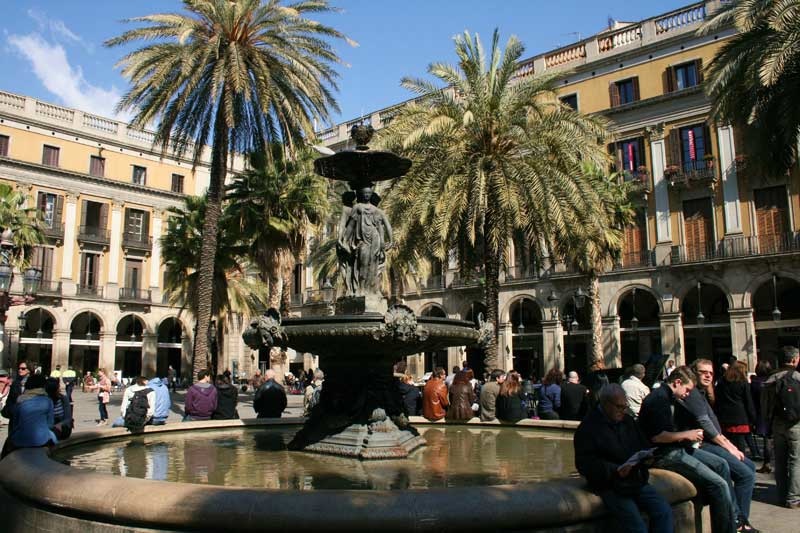 Barcelona, Spain’s most intriguing metropolis, is not just one city, but four. It’s a winding maze of medieval alleys branching out from the central square; it’s a former fishing village that’s home to one of Europe’s liveliest beaches; it’s a city of culture where you can get arty in a museum or thrill to the sounds of opera; it’s an elegant city of wide boulevards and playful, decorative buildings.

Take time to discover its multiple charms. Each district, the Barrio Gotico in the centre, Barceloneta to the south, Eixample to the north and El Raval to the west, boasts its own character. Each one combines with the others to make a city that is much more than the sum of its parts.

This is where it all began, and here you’ll find Barcelona’s fascinating historic roots. Move through the tangle of ancient streets but make sure you visit Barcelona’s City Museum in Plaza del Rei. Upstairs there are interesting displays covering the city’s rich and colourful history, but take the lift to the lower levels and you’ll step back 2,000 years in time to walk the actual streets used when Barcelona was a thriving Roman colony. Covering over 2,000 square metres, the archaeological excavations allow you to see the remains of Roman houses, complete with wall paintings and floor mosaics, the city’s laundries and numerous shops.

The narrow streets of the medieval area open-up at regular intervals into charming open spaces. Stand in the square in front of the Gothic cathedral and take in the atmosphere. Providing a taste of Catalan culture, most days you’ll see groups of locals dancing, their arms held high, in a traditional folk dance called ‘las sardanas’.

El Gotico is home to another of Spain’s fine squares. Plaza Reial is a haven of cool in the heat of the summer with towering palm trees providing shade. Walk under the arched walkways and pause for a tapa in one of the small restaurants. The ornate lamp posts dotted around the perimeter were designed by Barcelona’s most famous architect, Antonio Gaudí. Cross over Via Laietana into the area known as El Born to discover a more Bohemian side to the area. This is where you spend time in the Picasso Museum or just browsing through the many small gift and clothes shops.

Embracing the artistic feel of the area and providing gourmet casual dining is Ávalon by Michelin-starred chef Ramón Freixa. Try the meatballs served with grilled cuttlefish or the succulent veal cheek that comes with creamy mashed potatoes. The restaurant is housed within the chic, contemporary surrounds of Grand Hotel Central, which provides some of the best accommodation in the historic quarter. Take the lift up seven floors to the rooftop terrace and relax on the sofas and lounges by the infinity pool. This is the place to be with a cool drink in the late afternoon. The views of the city skyline across to the Mediterranean Sea are inspirational.

Jutting out from on a long finger of land, this is where Barcelona meets the sea. It’s the perfect spot to relax on the sand and enjoy a day at the beach. It’s extremely popular with locals and visitors alike due to its close proximity to the city centre. Jump in a taxi and in just 15 minutes you’re there. Apart from taking a dip in the Mediterranean Sea, basking in the sun and relaxing while watching the waves, there is more to Barceloneta than meets the eye.

For a start, right on the boardwalk, there’s Rebecca Horn’s quirky steel sculpture ‘Homenatge a la Barceloneta’ to check out, while further towards the Olympic Port there’s Frank Gehry’s spectacular, glittering, gold, monumental fish. On the beach itself you’ll find people engaging in a host of entertaining activities such as volleyball, sumo wrestling – complete with fat suits, kite flying, having a sing along while playing the bongos, all whilst hawkers patrol the sands selling everything from seafood empanadas, fruit, beach towels and massages.

After working up an appetite, enjoy lunch, along with spectacular beach views at Bravo within the über funky W hotel which rises up from the sand like a shiny silver sail. Located on the lower level of the hotel, Bravo has outdoor tables to catch the breeze and admire the long curve of the sand. The menu, prepared by Michelin-starred chef Carlos Abellán, focuses on fresh Catalan cuisine with a creative twist.

On the opposite side of La Rambla to El Gótico you’ll find the El Raval neighbourhood. It’s Barcelona’s most colourful area, which has always attracted arty types. Pablo Picasso, Joan Miró and Ernest Hemmingway all spent time here. The Barcelona City Council has been working hard with an urban renewal programme aimed to bring people into the area and enjoy its multiple offerings and unique character.

Right on the famed, tree-lined Rambla, which has been described as the most beautiful street in the world, is a 19th century marvel of ornamentation and one of El Raval’s greatest attractions. Barcelona’s opera house, El Liceu, hosts outstanding opera productions throughout the year. June and July see performances of Pelléas et Mélisande by Claude Debussy and Aida by Giuseppe Verdi.

Right next door to this temple of music is Barcelona’s most famous fresh food market. Mercat St Josep houses hundreds of stalls selling fish, seafood, wild mushrooms, fruit, cheese and all manner of Spanish produce making it a lively place and full of photo opportunities. Just a short walk away, through the narrow streets, you’ll find more cultural treasures. MACBA – the modern art museum which, apart from the excellent permanent collection with works by all the Spanish big names, hosts special exhibitions throughout the year. Outside the MACBA is another of Barcelona’s squares. Beloved by skateboarders during the day, summer nights see it become an open-air cinema complete with hundreds of deckchairs and popcorn sellers.

Slicing the area in two is the beautiful avenue, La Rambla del Raval, complete with palm trees, potted flowers, benches and Fernando Botero’s playful statue, The Cat. Although Gaudí’s architectural treasures are dotted around the city, just off La Rambla del Raval you’ll find one of his finest. Palau Guell, on Nou de la Rambla, is an amazing private mansion that was built for his patron Eusebi Guell. Its Modernist façade is adorned with ceramic mosaics and fanciful cast iron sculptures.

In contrast with much of Barcelona, where there is a tangle of narrow streets and getting lost is all part of the fun, this area is characterised by wide tree-lined boulevards set in a perfect grid pattern. It was here that Barcelona’s great modernist architects gave the city its unique beauty and built homes for the wealthy along the length of the city’s prestigious street, Passeig de Gracia. The most famous edifices are Gaudí’s Casa Batlló and Casa Milà.

Both can be visited, but the sculptured rooftop chimneys on Casa Milà are one of Barcelona’s most wonderful spectacles and should not be missed. Take the lift to the top floor and spend some time allowing your imagination to run wild as you view these strange stone and tile structures.

Barcelona packs a serious punch as far as sights, sounds and original experiences go. Take your time to discover each of its areas and enjoy their special charms, from the museums, restaurants, history or just the great Mediterranean atmosphere.