Banking on the future 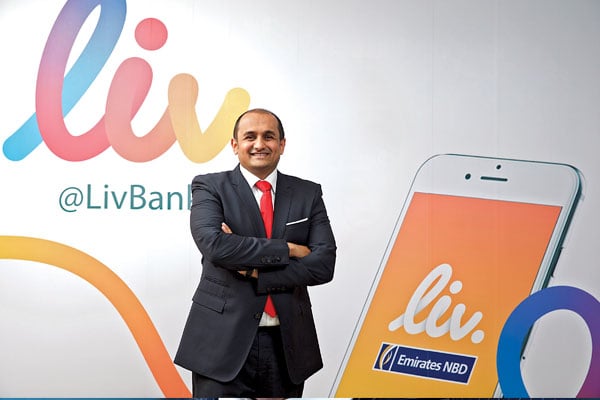 When Emirates NBD took the bold step of launching digital-only bank Liv. in 2017, the lender moved into a relatively untested segment for the region.

Announcing the arrival of the new proposition two years ago, Emirates NBD said that Liv. is aimed at a new generation of customers, with an intuitive and simple to use format.

“Liv. has been conceived and built differently from the ground up,” said group chief operating officer Abdulla Qassem at the time about the bank that allows customers to open their bank account instantly from their smartphones, deposit funds into their accounts immediately, and pay bills free of charge.

Some 24 months later, the digital bank has proved a success, with thousands of people signing up to the offering.

“In less than two years since launch, Liv. has become the fastest growing bank in the UAE, acquiring over 10,000 new customers every month and recently crossing the 200,000 mark,” says head of Liv., Jayesh Patel.

“Over five in six of our customers are millennials and we see accounts being opened 24/7, including from remote areas of the country,” he adds.

While the numbers have justified the concept, Emirates NBD took something of a risk in making the leap into digital-only territory. But for Suvo Sarkar, senior vice president and head of retail banking and wealth management at Emirates NBD, the need was too great to ignore.

“Emirates NBD was already a regional market leader in banking digitisation and innovation. However, research indicated that the 2.5 million millennials residing in the UAE expected more from banks,” he says.

“Hence, we built the Liv. proposition around millennials’ view that money is primarily a means to gain experiences. This is why, unlike a traditional bank, our offering integrates lifestyle preferences with banking, helping customers keep track of their daily life and their finances on one app.

“Typically, when banks digitise their service offering, they tend to convert existing processes and services to a digital format with incremental improvements. In contrast, Liv. has been built completely new by a team of millennials with a start-up mindset, keeping like-minded customer needs and requirements at the centre of the proposition.”

By building a digital bank effectively from scratch, the Liv. team were able to put technology at the core of everything they did, allowing for a much more personalised service than traditional banking could provide.

“New Liv. customers are asked to indicate their personal preferences when signing up, enabling us to offer them a curated daily feed of news, deals and offers based on their needs,” continues Sarkar.

Add to this features such as the ability to transfer funds through social media channels and the tagging of expenses to keep track of spending, and you can see how the targeted use of new technology has helped Emirates NBD appeal to the next generation of customers.

But it hasn’t all been plain sailing for Liv., with numerous hurdles to pass along the way.

“One of the early challenges we faced was the internal shift in mindset needed to incubate a start-up,” says Sarkar.

“We had to think, act and innovate like a FinTech and not as a traditional large bank.

“Another issue was that some of Emirates NBD’s core IT platforms, which also support Liv., were undergoing an enhancement in parallel, slowing down our go-to-market timelines somewhat. But we now manage to achieve an app update release one in three weeks on average.

“Another concern is that the ecosystem in which Liv. operates is not yet fully digital, thus presenting a few challenges in integrating relevant information easily to enable completely seamless customer experiences.”

But for Jayesh, it was important for Liv. to take the lead in this new approach to banking, despite the challenges, and have established partnerships to ensure the lender continues to lead the way.

“We seek to be early adopters of new technologies to help provide a differentiated and digital experience to our customers,” he says.

“We were one of the first to roll out mobile-based account opening aided by biometrics, and contactless payment technologies help Liv. customers pay conveniently using Apple or Google Pay.

“We also partner with new and innovative tech firms to bring latest tools to the market that can help us improve our customer experience. A development we are very excited about is the imminent introduction of Olivia, Liv.’s first chatbot powered by AI that will enable us to respond to customer queries quickly.

“We are also setting up a cloud-based IT platform that will help us scale Liv. quickly to new markets. In addition, we are exploring facial recognition mechanisms, big data based analytics and fraud prevention technologies.”

With plans to expand into markets such as Saudi Arabia and Egypt, Liv. is a positive example of how FinTech is impacting the banking industry. And according to Sarkar, it is inevitable that further change is on the horizon, with collaboration at the heart of the evolution.

“In our view, banking will continue to be disintermediated and transformed rapidly by changing customer demographics, new technologies, and converging user platforms that bring a diverse set of players,” he says.

“FinTechs have moved from being early disruptors to collaborating with banks, thus combining their agility with our scale to provide better customer experiences.

“FinTechs allow banks to add new series and enhanced customer experiences faster and in a better way. For consumers this is great because we can reach new levels of customisation, getting closer to a segment of one. However, disruption from Silicon Valley and Chinese big techs could further change the game.”

The executive adds that meeting customers’ rising expectations will be key to success in this new banking era, suggesting that those lenders who can balance their legacy with fast adoption of new technologies will come out on top. But it is no easy feat.

“Like Emirates NBD, other established banks are launching challenger digital banks to stay ahead of the game,” he says.

“However, putting this strategy into play will require stretching of some internal boundaries and to learn to operate from paradoxical mind sets: of managing simultaneously a champion and a challenger, of exploiting entrenched strengths while exploring uncharted opportunities, of trying to succeed mostly as opposed to failing quickly, and of being a middle-aged start-up.

“Banks that are able to manage these contradictory positions successfully will enjoy the best of both worlds and emerge as winners.”