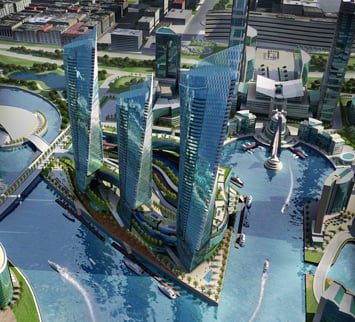 Saudi’s Al Rajhi Bank, which was the project’s original financer, was confirmed as the restructuring financer.

The Villamar project comprises three towers of 54, 52 and 43 storeys with a mixture of hotel and residential space.

It was originally launched in 2007 and a $380m contract was awarded to Sharjah-based Al Hamad Contracting.

However, work stopped during the financial crisis and it missed its Q1 2010 completion date.

In August, GFH said it had confirmed a restructuring deal for the project, which is spread over 35,900 square metres.

Under the restructuring GFH will provide up to $50m in financing for the project, which will be completed in phases.

The first will cover structural work and the interiors on a leisure and retail mall on the podium floors of the project, as well as apartments in the second tower, according to reports in August.

The company said the restructuring deal would have a positive impact on its real estate project development firm Gulf Holding Company.

Bahrain’s government has been seeking to restart many of the country’s halted projects this year as the country contends with lower revenues from oil.