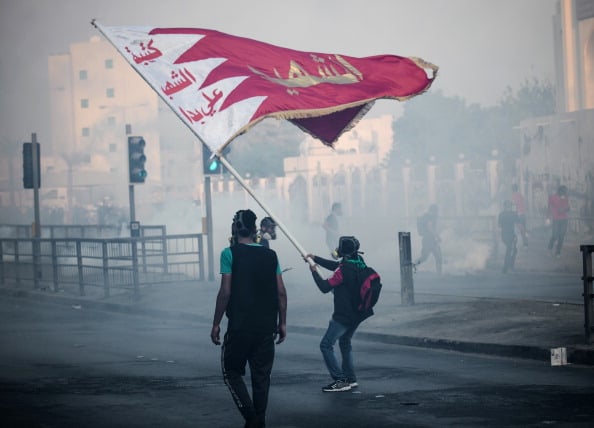 A Bahraini teenager died on Wednesday after clashes between security forces and demonstrators marking the third day of mourning for a young man killed by a bomb blast last week, witnesses and activists said.

The Interior Ministry said police was investigating a report that a dead person had been brought into a clinic in the Shi’ite Muslim town of Sitra, south of the capital Manama.

The Gulf Arab Kingdom, home to the U.S. Fifth Fleet, has suffered low-level civil unrest since mass protests in 2011 led by Shi’ites demanding reforms and a bigger share of power in the Sunni-led state.

The main opposition group al-Wefaq named the young man as Sayed Mahmoud Sayed Mohsen and said he was 15. A witness said his upper left side appeared to have been hit by a burst of birdshot.

Local residents described him as a “citizen journalist” who had been filming and photographing demonstrations and clashes and posting them on social media.

Residents said the clashes erupted at the end of a traditional three-day mourning period for a young Bahraini who died in a blast on Friday. The English-language Gulf Daily News said that young man, identified as Ali Faisal Al-Akrawi, was planting a bomb targeting policemen when he died.

Militants have increasingly been using explosive devices to target security forces in the past year and a half.

In the worst attack last March, three policemen were killed by a remotely detonated bomb in a village west of Manama.

In Wednesday’s incident, witnesses in Sitra said police used birdshot and tear gas against young men who threw stones and metal rods at them.

In a one-minute video posted on Youtube, footage showed youths running away as police gave chase while sounds of gunshots rang in the air. The footage then shows a young man lying in the back seat of a car seeming unconscious. His mouth and nose are red with blood.

“The main operations room received a notice from the health centre in Sitra stating that a dead person had been brought in,” the Interior Ministry said in a brief statement sent on its Twitter account.

Demonstrations and clashes with security forces erupt frequently in Bahrain, while reconciliation talks between the government and opposition aimed at ending the unrest remain on hold.