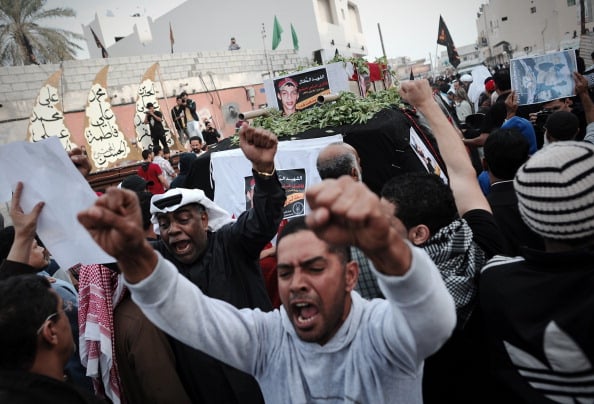 Bahraini police firing teargas and birdshot clashed with stone-throwing protesters in a village west of the capital on Sunday after the funeral of a young man who died in custody, witnesses said.

The tiny Gulf Arab island monarchy, a U.S. ally, has suffered unrest since mass protests led by majority Shi’ite Muslims erupted in early 2011 demanding reforms and a bigger share of power in the Sunni-led government.

Sunday’s violence following the death of 20-year-old Fadhel Abbas threatened to sour a new attempt to restart negotiations between Bahrain’s government, led by the ruling al-Khalifa family, and opposition groups.

Police said Abbas was detained on Jan. 8 on suspicion of smuggling weapons and explosives and died late on Saturday.

The force’s statement, released on Sunday, said he was shot in a car while attempting to run over police who were trying to arrest him. Another person in the vehicle was in police custody, it added.

Hundreds of people attended his funeral in the village of Diraz on Sunday, said witnesses.

Afterwards, protesters blocked roads and set fire to debris in the streets, while security forces tried to break up the crowd. There were no initial reports of injuries.

The main opposition, Wefaq, said Abbas’ family had been prevented from visiting him in hospital – a report the government denied. Wefaq distributed photographs of his body appearing to show a large injury on the back of his head.

He also appointed a delegate from the ruling family to attend the dialogue, and agreed on a list of topics for discussion.

The last round of reconciliation talks was suspended last year with the government accusing Wefaq of secretly backing violent attacks on police, and the opposition accusing the authorities of cracking down on its members.

Bahrain is home to the U.S. Fifth Fleet.