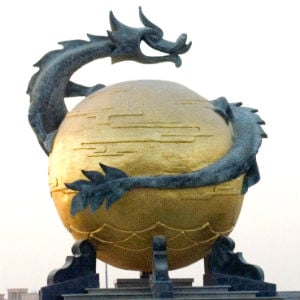 Bahrain’s Diyar al Muharraq has signed a deal with Chinamex, a Chinese company, to develop a multi-million-dinar shopping complex in Bahrain.

The project, called Dragon City, will have the initial capacity to host 100 Chinese companies and businesses, project officials said.

The Chinese-themed retail shopping mall is expected to be operational by September 2014 and could attract more than half a million visitors a year when ready, said the developers.

“This is a significant step towards further cementing the existing historic ties between Bahrain and China,” said Abdul Hakim Al Khayyat, chairman of Diyar al Muharraq.

“We haven’t finished the work on the financial impact, but what we know at this stage is that this pioneering project will give a new dimension to business in Bahrain and across the GCC,” he added.

Chinamex, which will market and manage Dragon City, has experience in the promotion and operation of similar projects such as the Dragon Mart in Dubai, added Khayyat.

Diyar Al Muharraq is a $3.2 billion mega mixed-use city being developed by Kuwait Finance House Bahrain and other GCC-based investors.