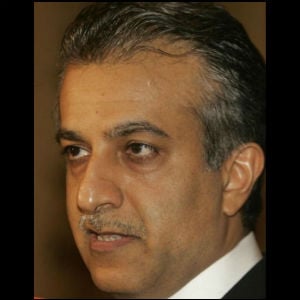 The head of soccer in Bahrain declared himself favourite to become the next Asian Football Confederation (AFC) president but ducked questions on Tuesday about the arrest of players in his country during a bloody 2011 uprising.

Sheikh Salman bin Ebrahim Al Khalifa, who is also standing for election to world body FIFA’s powerful executive committee, told Reuters in an interview in his plush Manama office that he was confident the May 2 vote in Kuala Lumpur would go his way.

Asked if he was the favourite to win the AFC election the 47-year-old said: “I think I am, yes.”

The member of the ruling royal family sidestepped a question about whether he feared the ongoing civil unrest, and allegations that some players were tortured in custody in 2011, might have a negative impact on his campaign.

“My response is let’s talk about football and leave the political side to the other people who deal with that,” he said. “We hear reports a lot from all sides and I am here to talk about the elections.

“I don’t want to talk about these matters because the moment you talk about it, it opens the door. Since I have been in charge of football here in Bahrain, we always leave religious and political matters and views outside to try to focus on the game.”

One British sports reporter who asked about the allegations at a later news conference, conducted in Arabic, went unanswered after the moderator stepped in and told him he was trying to ruin the event.

Another foreign reporter was asked to leave, before Sheikh Salman spoke of the need for transparency and integrity in Asian football.

Sheikh Salman said it was essential that Asian soccer’s top official should also be on the FIFA executive committee and there should not be separate polls for the two positions.

“How can we have a president who cannot have our voice in FIFA?” asked the Bahraini. “To have a candidate running for just one post and not another I regard as a compromise, a weak position just to accept what they can get.”

The executive committee position runs to 2017 while the AFC will elect a new president for just two years to replace disgraced Qatari Mohamed Bin Hammam.

Bin Hammam has been banned for life by FIFA for corruption and bribery and his place has been filled temporarily by China’s Zhang Jilong, who has also sat on FIFA’s executive committee.

Four candidates are vying for the presidency, three of them from the Gulf region and the other being Thailand’s FIFA executive committee member Worawi Makudi.

The Bahraini positioned himself, as a past rival to Bin Hammam, as the outsider who could step in and clean up Asian soccer’s corrupted image.

Tackling the scourge of match-fixing in Asia would be a clear priority, with zero tolerance for offenders and enlisting the help of governments, as well as treating all national associations as equals no matter how big or small.

“I think people have sensed the wind of change,” said the man who lost the AFC vote for the FIFA seat 23-21 to Bin Hammam in 2009. “I think I represent the new face of Asia.

“People who want to vote for the change, the choice is clear. If people want to leave matters as they are, they have the right to do so.

“I think for the last few years it has been like a roller-coaster up and down that the AFC has suffered,” he added. “I think it’s time to steer the ship to calmer waters. This is what I’d like to do.”

Asked whether he felt his rivals were ‘tainted’ by association with Bin Hammam, he replied: “I think the (national associations) around Asia can understand where each individual stands and who they represent.

“I can feel that people want to embrace that change… we want a clean AFC, we want to do the changes that are needed, the transparency.”

Al-Serkal has accused the Olympic Council of Asia, run by Kuwait’s Sheikh Ahmad al-Fahad al-Sabah, of meddling in the AFC vote by endorsing Sheikh Salman. The Bahraini dismissed that.

“We should be more mature than that,” he said. “We know that there are people supporting others and this happens in an election. If he (Sheikh Ahmad) wants to support me, he is free to support me.

“We should talk about the main issues rather than the other candidates. I think it’s just a weak position if the candidate is talking about the others rather than what he is willing to do and his programme.”

Sheikh Salman denied suggestions he was a ‘puppet’ for the Kuwaiti Olympic chief.

“I’ll be my own man and I’ve got two years to prove that. I can say of the others that they are puppets of other regimes or other countries? Would that be right? I don’t think so,” he retorted.

The Bahraini said he was in favour of the Islamic headscarf, or hijab, in women’s soccer if it helped the game to grow in countries with cultural hurdles and religious taboos to overcome, such as neighbouring Saudi Arabia.

“Bahrain has a women’s team and they’ve done a terrific job. We’d like to encourage it at school level, at a club level. It’s going to take time. There’s always a cultural barrier that we feel in some countries.”