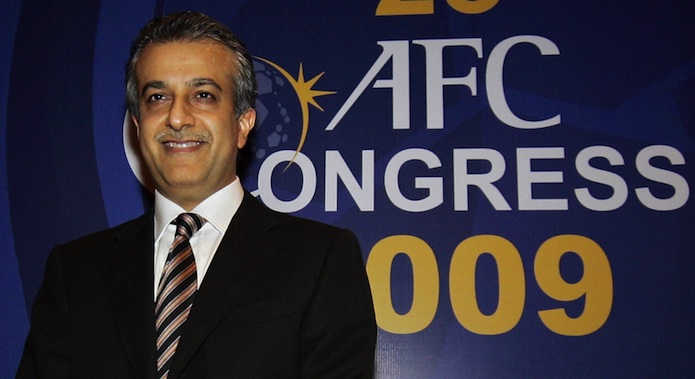 Bahrain’s Sheikh Salman Bin Ebrahim Al Khalifa has hit out at what he terms “nasty lies” about his actions during his tenure as the head of Bahrain Football Association.

The FIFA presidential candidate was accused by human rights groups of being complicit in the detention and torture of football players and other athletes who took part in Bahrain’s anit-government uprisings in 2011.

In an interview with BBC Sport, Sheikh Salman strongly denied such charges saying: “I cannot deny something that I haven’t done. Such accusations are not just damaging, it’s really hurting. Some people have agenda on their table.”

Many rights groups claim that he helped identify the players involved in the protests to the government and failed to protect them. But Sheikh Salman reiterated that they are just nasty lies.

“It’s not just damaging me, it’s damaging the people and the country. These are false, nasty lies that have been repeated again and again in the past and the present.”

If elected, he has promised to back Russia and Qatar’s bid to hold the World Cup tournaments in in 2018 and 2022 respectively. But both bids are under investigation by authorities looking into claims of the host country bribing FIFA officials for a favourable outcome.

Sheikh Salman has also vowed to correct the football governing agency’s image, which has been sullied by allegations of corruption among its ranks.

“With the support I’m going to get we’re going to turn it around very quick.”