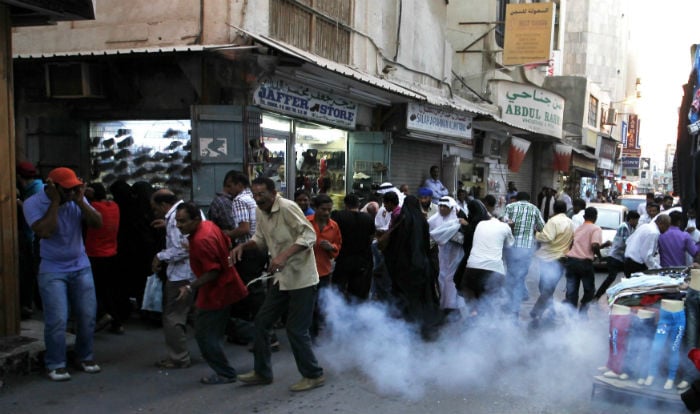 Bahrain must lift its total ban on opposition protests, which violates the right to freedom of expression and peaceful assembly, rights group Amnesty International said on Wednesday.

Bahrain, a U.S. ally which hosts the U.S. Navy’s Fifth Fleet, has been in political turmoil since pro-democracy protests erupted last year and were put down by the island’s rulers.

Bahrain’s Information Affairs Authority (IAA) said in a statement on Wednesday the minister had stressed that the ban was temporary until security and stability are restored.

He said the move was necessary because violence accompanying marches and gatherings had disrupted traffic, affected trade and the economy and damaged private property.

London-based Amnesty said the measure nullified the rights to freedom of association, expression and assembly.

“Even in the event of sporadic or isolated violence once an assembly is under way, the authorities cannot simply declare a blanket prohibition on all protests,” said Hassiba Hadj Sahraoui, its Middle East and North Africa Deputy Director.

“Law enforcement officials must act to protect peaceful protesters rather than using the violent acts of a few as a pretext to restrict or impede the rights of all.”

Bahrain’s leading opposition party Wefaq described the ban as an attempt to silence it.

“We reject this decision and consider it against our constitutional right. There is no reason for it because all our events are peaceful,” Wefaq official Sayed Hadi al-Mousawi told Reuters from Manama, adding that he feared the prohibition might lead to more tension in the street.

Britain has expressed concern over the ban but also called on demonstrators to “desist from violent protest”.

“A blanket ban of this nature is excessive,” Alistair Burt, Minister for the Middle East and North Africa, said on Tuesday.

“Peaceful protest is a democratic right. I hope the Bahraini government will rescind this measure as quickly as possible.”

Bahrain has banned a series of protests organised by Wefaq in the past few months. A senior official said in July the government had no plans to ban rallies outright, but wanted to ensure they did not turn violent.

Since April the authorities have stepped up efforts to crack down on unrest. Activists cite an increased use of shotgun pellets, whose use officials have declined to confirm or deny.

Activists have been sentenced to jail for organising or taking part in unlicensed anti-government protests.

On Oct. 19, a policeman was killed and another critically wounded in a bomb attack while on patrol in south Manama.

The IAA quoted Sheikh Rashed as saying that security forces were conducting a search for suspects in the attack that killed the 19-year-old policeman, denying what he said were rumours that a siege had been imposed on the village of Eker.

“Citizens of any country in the world would understand the necessity of implementing security measures to control, but not close, the entrances to the village in order to conduct a thorough investigation into an officer’s death,” he said.