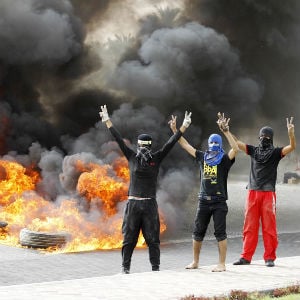 Formula One drivers will race in Bahrain on Sunday while rage boils on the streets outside, among protestors who denounce the Grand Prix as a gaudy spectacle.

Demonstrators hurling petrol bombs have clashed nightly with police during the past week, and security forces responded with teargas, rubber bullets and birdshot.

Black smoke from burning tyres wafted over Budaiya on Sunday morning, before the final race. Budaiya, outside the capital of Manama, was the scene of mass protests on Friday.

The death of 36-year-old protester Salah Abbas Habib – found sprawled on a rooftop on Saturday after overnight clashes – provides more fuel for outrage among protestors.

The luxury sporting event is the government’s chance to prove that life has gone back to normal in the island kingdom after security concerns over anti-government demonstrations forced last year’s race to be cancelled.

King Hamad bin Isa al-Khalifa, who will attend Sunday’s race, said in a statement overnight that he wanted “to make clear my personal commitment to reform and reconciliation in our great country. The door is always open for sincere dialogue amongst all our people.”

Bahrain is the only one of the Gulf countries to have been seriously threatened by Arab Spring protests that brought down the rulers of Tunisia, Egypt, Libya and Yemen since the start of 2011.

“Our initial demands were to elect a new government but after the disgusting abuse we received, all the people are asking for is for the regime to fall,” said protester Ahmed Madani during a march of 7,000 people on Saturday.

Some banners held up during the march depicted Formula One race car drivers as riot police beating up protesters.

The violence outside has had virtually no impact within the sealed bubble of Formula One, apart from a few staff of two teams who witnessed a petrol bomb-throwing incident.

Red Bull’s world champion Sebastian Vettel, who starts at pole position, said shortly after arrival on Thursday that he thought much of what was being reported was hype.

He looked forward to getting in the car and dealing with the “stuff that really matters – tyre temperatures, cars”.

But nightly TV images of streets ablaze with clouds of smoke and teargas are an embarrassment for Formula One and the global brands that lavish it with sponsorship.

Jean Todt, president of Formula One’s governing body, the International Automobile Federation, broke a media silence on Saturday to say he was sorry “about what has been reported”.

“I am not sure that all that has been reported corresponds to the reality of what is happening in this country,” he added.

The Bahrain government says it has enacted reforms after cracking down on demonstrators last year while revolts were sweeping across the Arab world.

Bahrain’s government is thought to have spent $40 million to host the event. Hackers brought down the F1 website intermittently on Friday and defaced another site, f1-racers.net, to support what they described as the Bahraini people’s struggle against oppression.

The race has drawn more than 100,000 visitors and generated over $500 million in spending. It has been a symbol of pride for the country since Crown Prince Sheikh Salman bin Hamad al-Khalifa brought the first Formula One Grand Prix to the region in 2004.