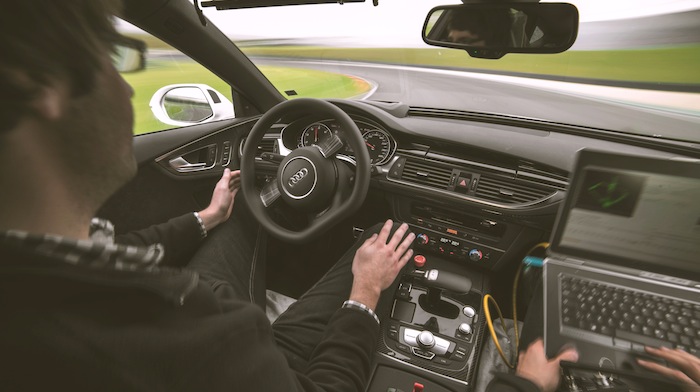 Audi chairman Professor Rupert Stadler stood in front of his stakeholders at the company’s Ingolstadt headquarters earlier this year and made a bold statement.

“We are turning the car into a digital experience space,” he said, highlighting how the business model for running a car company is about to undergo a dramatic transformation.

Has the car in the form we have known it for over a century overstayed its welcome?

Audi is the cornerstone of the world’s second biggest car producer, the Volkswagen Group, and is going through a €24bn five-year makeover. Easily the biggest investment in the company’s history, in addition to the €4.5bn it spent last year.

Board members at both VW and Audi tell Gulf Business this investment is driven by fundamental changes in the car and driving, as we know it. Changes that could make the driver almost superfluous.

“The 2017 Audi A8 will be the first model to make the transition from assisted driving to piloted driving,” Audi board member for technical development Ulrich Hackenberg explains.

Assisted driving is the terminology used for some of the latest technology including lane departure guidance and intelligent cruise control, which slows the car whenthe traffic ahead slows.

Piloted driving is the next phase. It allows the car to actively take control, relegating the driver to an observer status, only retaking the controls when requested.

“We drove an Audi RS7 in piloted mode on public roads through two states of the United States last January so our technology is ready for series production and the A8 could be the world’s first production piloted car.

“When we drove from San Francisco to Las Vegas, 85 per cent was self-controlled by the car and we were able to demonstrate that we can integrate with traffic at up to 140kmh.”

A similar RS7 completed a lap of the Hockenheim F1 Grand Prix track in Europe without a driver, hitting speeds of 240kmh.

Closer to home, Audi Middle East’s public relations manager Janice Hinson says it is important to educate those in the region about the differences between driverless and piloted cars before they are seen on the roads.

“There are slight differences between the two concepts,” she says. “Due to the extraordinary complex traffic situations a driver can encounter, the idea of a fully driverless car remains a vision in the region for the next generation.

“What is about to come is a car that allows the owner to choose whenever they want to drive as long as they are behind the wheel. The new Q7 offers everything that’s currently allowed by law from adaptive cruise assist to traffic jam assist.

“The Middle East is a growth economy that’s hungry for the latest and the best. Gulf buyers will undoubtedly be keen to embrace this technology if and when it’s certified for use here.”

A stretch of the German A9 Autobahn has been certified by the German Transport Ministry for the development of a test mule to mix with other traffic at 60kmh. The next phase is gaining European approval that will allow a driver to hand over complete control to the car’s computers, after Audi was granted US clearance to test the prototype.

“Getting that approval in the US was important because it proved that the car was controlled by itself and the driver could do something completely different like surf the internet for example,” Hackenberg says.

The end game, according to Stadler is to allow everyone inside the car the ability to focus on other activities instead of driving.

“While you are managing your world, especially in mundane or fatiguing situations, your car will drive itself. That’s our vision of piloted driving,” the company chairman says.

The onboard tools used for piloted driving include radar, laser and ultrasound sensors as well as numerous cameras. These create a picture of the surrounding traffic.

Audi’s high-tech concept, the Prologue Coupe learns its environment with every kilometre it drives and saves that knowledge in a data cloud that it continually compares with hardwired onboard data.

This gives information not only about the car’s behaviour but also the reactions of its driver and other road users. It gives weight to VW’s argument that connected cars are not only safer but also more efficient as they adjust their driving style to the prevailing conditions.

“There are three big steps to the future mobility of the car,” VW head of powertrain development and board member Heinz Jakob Neusser insists.

“The first is the powertrain which incorporates hybrid and alternative fuel technology; the second is the digitalisation of the car such as information transfer via the cloud and the human-machine interface,” he says. “This is how a driver engages with the car by using hand gesturing or waving to change settings instead of pressing buttons and the third is autonomous driving, which includes assisted parking and assisted driving.

“We are working intensively on assisted driving and it’s something you will see in mainstream Volkswagens within the next five years.”

This magazine recently inspected the VW Golf GTE Sport Concept at the annual Worthesee show in Austria. It was the first public appearance of a prototype that features all three elements as a rolling test bed of VW’s future direction.

Using electric motors mounted in both axles as well as a petrol engine, it showed the extreme end of what’s possible.

The 400bhp coming from its 1.6-litre turbocharged engine is driven through all four wheels aided by two electric units.

“Because we developed this modular platform to carry these different powertrains together very early in the concept phase, we could define the axle system in a way that the e-motors fit in the centre. All future Volkswagens will offer the combination of combustion engine and e-motors,” Neusser says.

“We have the packaging already established in this new platform so that all of VW’s powertrains can fit into the same system from the beginning of development.

“I think the Middle East will love this technology because the GTE Sport Concept combines every type of driving profile. You can cruise in absolute silence but when you want performance, you can engage all the power units simultaneously. We could extract up to 500bhp from this combination.”

Volkswagen found that customers cover 80 per cent of their everyday journeys within a 50km range. Neusser has achieved his goal of offering that range in all-electric mode for all the company’s plug-in hybrid models and expects the greatest sales opportunities to come from the hybrid sector.

“The Middle East is a unique market where there is a strong appetite for the latest technology and gadgets with a passion for automotive innovations. The Golf GTE carries similar driving dynamics as a Golf GTI with excellent performance, so our focus is not compromising the driving experience,” Milz claims.

“The GTE Sport Concept has created a buzz in this region and we have received positive response from right around the Gulf.”

Emerging markets like the Middle East are taking the lion’s share of global car sales. Regional sales rose by 50 per cent in 2012 and are predicted to reach 60 per cent growth by 2020, while overall global growth – according to IHS Research – is estimated to be 2.4 per cent year-on-year in 2015.

“More initiatives are coming into effect also by governments focusing on sustainable technologies and environmental behaviour. The Dubai government is in the process of establishing 100 charging stations for hybrid and electric cars across the emirate by end of 2015,” Milz says.

Vehicle sales across the United Arab Emirates could touch 425,000 this year, up 5.1 per cent over 2014 and 16.7 per cent more than in 2013. So while the numbers are small compared to established markets, the growth is strong – something Hackenberg is keeping an eye on.

“I know that Middle Eastern drivers place a lot of emphasis on enjoyment and hybrids can meet this need. Hybrids are very powerful, emotional cars and make sense in the Gulf,” he says.

“The use of electric power is especially important for the Middle East where you have vast distances between cities, which is when you need the full power from a combustion engine.

“If you have a zero emission electric motor that develops 100kW (134bhp) that’s aided by a 200bhp petrol engine for the long haul journeys, you have a very powerful, yet clean car,” Hackenberg concludes.