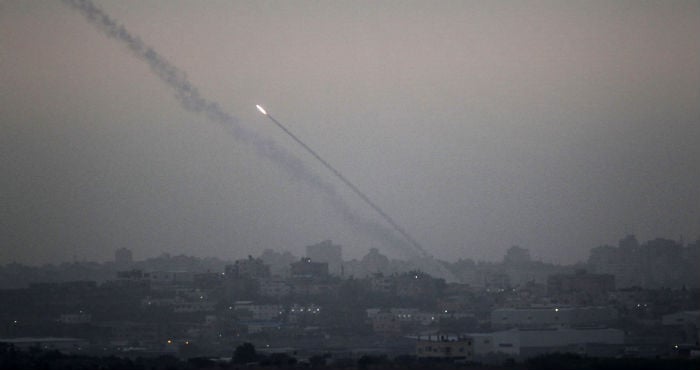 A man stabbed a security guard at the US embassy in Tel Aviv on Tuesday and was apprehended, a police spokesman said, and Israel Radio reported the assailant was an Israeli with a criminal background.

The motive for the attack, which occurred outside the beachfront embassy, was not immediately known.

“A Mazda car stopped next to the U.S. embassy and a man got out carrying a red bag and a pitchfork,” said David Cohen, 48, who told Reuters he witnessed the incident while jogging along Tel Aviv’s Mediterranean promenade.

“He began to run toward the security guards. They saw him, took their guns out and told him to get down on the ground,” Cohen said.

“He continued running and then they fired in the air and ordered him agains to lie down. He continued to advance. They jumped on him and took his bag away.”

The police spokesman said one of the guards was slightly wounded and the attacker was taken into custody.

The news comes even as the White House said today that Hamas must end rocket attacks into Israel and that Egypt can be a partner in helping to resolve the continuing conflict in Gaza.

White House deputy national security adviser Ben Rhodes made the comments during a briefing in Cambodia.

Meanwhile UN Secretary-General Ban Ki-moon called on Tuesday for an immediate ceasefire in Gaza and said an Israeli ground operation in the Palestinian enclave would be a “dangerous escalation” that must be avoided.

Ban was speaking at a news conference in Cairo after talks with Arab League chief Nabil Elaraby.

Elaraby said that a ministerial delegation from the Arab region was “going to Gaza strip to express their full solidarity with the Palestinian people there”.

An Arab League source confirmed that foreign ministers from a group of Arab states and Turkey are on their way to Gaza to show their solidarity with the Hamas-ruled Palestinian enclave.

The visit was planned at an emergency Arab League meeting in Cairo last Saturday, at which Arab ministers gave their backing to Egyptian efforts to try to secure a truce between the Israelis and the Palestinians.

“The foreign ministers of Egypt, Morocco, Palestine, Iraq, Sudan, Qatar, Lebanon, (and) Jordan along with the Turkish foreign minister left from Cairo to Al-Arish city (near Egypt’s border with Gaza) from where they will cross the Egyptian Rafah crossing into Gaza,” the Arab League source said.

Arab ministers have condemned the Israeli air offensive on Gaza that begun on Wednesday in response to what Israel said was an unacceptable barrage of rockets fired by Hamas into southern Israel.

Some 110 Palestinians have been killed, the majority of them civilians, including 27 children. Three Israelis were killed last week when a Gaza missile struck their house.