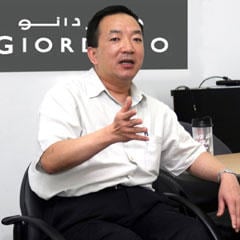 Hong-Kong based clothing store Giordano International – which clocked in over $1 billion in sales last year – has become one of the top five clothing retailers in the Arab region and is making further inroads into the region, confirmed Giordano’s chairman Dr Peter Lau.

“Our performance in the Middle East continues an upward trajectory and we are keeping on with our expansion plans with the target to reach 300 stores by the end of 2015,” he said.

Giordano Middle East’s market share currently counts between eight to 10 per cent of Giordano globally and this is expected to increase to at least 15 per cent by 2015.
The retailer has a substantial share in the casual wear market in the GCC, particularly in Saudi Arabia.

“Saudi Arabia is our best performing market in the Middle East with consistent double digit sales growth registered year on year. We currently have 90 stores in the country and are planning to launch our Giordano online store in the Kingdom very soon,” said Dr Lau.

The company has also established a new logistics and distribution centre in the Jebel Ali Free Zone – Giordano Middle East Free Zone Establishment – to serve as a hub for its global expansion and franchising outside Asia.

“The centre will be operational from February 2013 and provide strategic support, logistics and management to Giordano’s franchise partners across the region and is also responsible for Giordano’s expansion and franchising outside Asia.”

Giordano is focusing on emerging markets particularly in Central Asia, Central and Eastern Europe, Dr Lau confirmed. In China, the retailer’s stores have grown from about 400 in 2003 to over 1,300.

“Despite the market’s slowdown, we still see plenty of untapped potential in the country. To face the weaker economic growth we had to partially rethink our strategy for the market, focusing for instance more on shopping centers rather than street-front shops due to the high increase in the rents,” added Dr Lau.

Giordano Middle East opened its first retail outlet at Burjuman Centre, Dubai, back in 1993 and now operates a total of 240 stores in 23 countries.

“We have set ourselves an ambitious expansion plan to open another 60 stores in the region and India by the end of 2015.”