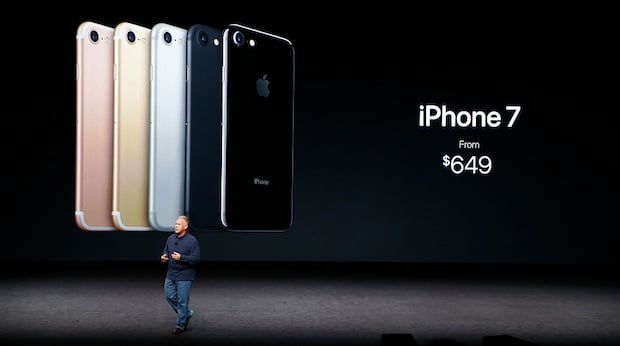 Apple unveiled its latest smartphones, the iPhone 7 and iPhone 7 Plus on Wednesday with improved camera features and without a headphone port – in keeping with the leaked rumours.

The new device is also claimed to have the “best battery life ever in an iPhone”, enhanced stereo speakers, and is supposedly the first “water and dust resistant” smartphone from Apple.

“iPhone 7 and iPhone 7 Plus dramatically improve every aspect of the iPhone experience, reaching a new level of innovation and precision to make this the best iPhone we have ever made,” said Apple’s senior vice president of Worldwide Marketing Philip Schiller.

“The completely redesigned cameras shoot incredible photos and videos day or night, the A10 Fusion chip is the most powerful chip on any smartphone while delivering the best battery life ever in an iPhone, and an entirely new stereo speaker system provides twice the sound, all within the first water and dust resistant iPhone.”

Camera: The 12-megapixel camera includes optical image stabilisation on both the iPhone 7 (finally) and the iPhone 7 Plus and also comes with a larger ƒ/1.8 aperture and six-element lens with wide colour capture.

The front camera, at 7MP, is full HD and includes auto image stabilisation.

The cameras also come with a new image signal processor and a quad-LED true tone flash that is 50 per cent brighter than the iPhone 6s.

The iPhone 7 Plus also adds a 12MP telephoto camera that, along with the existing camera, offers optical zoom at two times and up to 10 times digital zoom for photos. Coming later this year, the dual 12MP cameras will also enable a new depth-of-field effect.

Audio: Most significantly, the new smartphones do not have headphone ports, but supposedly offer new stereo speakers with sound that is two times louder than the iPhone 6s.

The new iPhones also come with EarPods with lightning connector and a 3.5 mm headphone jack adapter that allows customers to use old headphones and accessories.

Apple has also launched new wireless headphones called AirPods, that can be purchased seperately for Dhs649.

Battery: The new smartphones come with an Apple A10 Fusion chip which is expected to provide more time between charges and is said to offer the longest battery life ever in an iPhone.

Both phones include support for up to 25 LTE bands.

Design: In terms of design, the iPhone 7 features a new home button and offers enhanced protection against spills, splashes and dust.

Both the iPhone 7 and iPhone 7 Plus also come with Apple’s new iOS 10 which offers an update to messages; improved Siri abilities; new ways to interact with apps; and greater usage of 3D Touch.

Apple’s iPhone 6S, 6S Plus expected in UAE within a month

Etisalat To Launch iPhone 6, iPhone 6 Plus On September 26 In UAE