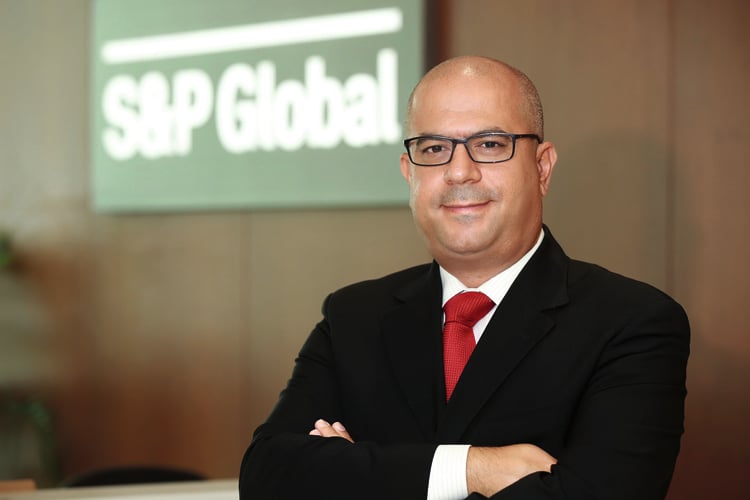 As we take our first steps into 2018, S&P Global Ratings’ managing director and regional head for the Middle East, Hadi Melki, presents an analysts’ outlooks on five sectors across the Gulf

“In 2018, S&P Global Ratings expects the pace of decline in the average GCC sovereign rating to slow.

“In 2017, our specialist sovereign credit analysts lowered the sovereign ratings of Bahrain and Oman by two notches each, as the extent of their fiscal and external deterioration continued to worsen beyond our expectations. However, analysts have now factored GCC governments’ varied responses to muted oil prices in the coming years into projections and assume an average Brent oil price of $55 from 2018 onwards.

“Our analysts’ concerns were exacerbated by a new risk which emerged in 2017, with tensions escalating following actions by Saudi Arabia, the United Arab Emirates (UAE) and Bahrain, along with other Arab states, to cut diplomatic ties, as well as trade and transport links, with Qatar. Currently S&P Global Ratings’ negative outlook on Qatar reflects the potential consequences of the boycott on the country’s economic, fiscal, and external metrics, especially if the boycott is tightened or prolonged.”

“We believe that 2018, absent of any materialisation of geopolitical risks, will mark the stabilisation of the financial profiles of Gulf banks. Our banking analysts believe lending growth will remain muted in 2018 given the GCC countries’ low economic
growth predictions.

“GCC banks’ cost of risk should increase because of the adoption of IFRS9 and the higher amount of restructured and past due but not impaired loans sitting on their balance sheets. However, general provisions accumulated by Gulf banks in the past years should help a smooth transition to the new standard.

“Overall, we expect revenue growth to decelerate and banks to continue cutting costs where possible. Fintech collaboration and the use of technology for low added-value transactions, such as money transfer and payments, could offer some opportunities in this space.

“Profitability will also stabilise at lower levels than what we have seen historically, underpinned by the introduction of value added tax (VAT) and increased cost of risk. We continue to believe that consolidation in the banking sector will remain the exception rather than
the new norm.”

“Difficult operating conditions in the region will continue to negatively impact the real estate sector for the next 12 months in the absence of positive triggers, in S&P Global Ratings’ real estate analysts’ opinion.

“Despite regional political risks, real estate ratings in the United Arab Emirates have remained stable. Residential property prices and rents have declined by 5-10 per cent during the year, in line with our expectations. Potential supply is a significant concern in Dubai with a large amount of units coming onto the market in the next couple of years, which will not only soften sale prices but also dampen rental yields. While this will nominally affect rated developers such as Aldar Properties, Emaar Properties and Damac Properties in the short run given their current strong margins and low leverage, it’s very important for these developers to complete construction of pre-sold units while maintaining strong credit metrics.

“While companies with strong margins and robust balance sheets will be able to withstand downward pressure, their smaller counterparts are set to experience a challenging 2018.”

“In 2017, our prior anticipation of greater financial innovation in structured and project finance bonds began to materialise with three new ratings: Acwa Power Management and Investments One Ltd (APMI1), UAE’s ADCOP crude oil pipeline transaction, and UAE-based Emirates SembCorp Water and Power Company PJSC (ESC). Despite subtle differences in each transaction, we believe all three transactions ultimately are similar in their strategic aim, which is to use existing assets with predictable, stable future cash flow streams to obtain fixed-priced-based long-term funding upfront by way of bond issuances.

“The funds could be used for repayment of existing shareholders or for funding future capital expenditures. In this sense, we see all three transactions as creating new pockets of stable long-term liquidity for the issuers. This comes as both regional and international banks increasingly find it harder to offer long-term funding for infrastructure projects amid regulation (Basel III), falling bank deposits from GREs, and low interest rates that have affected their liquidity and profit margins.

“We also think some of the traditional government-funded and government-procured projects will, in time, be replaced by greater private-sector participation in GCC infrastructure. With governments placing a greater onus on sharing the burden of infrastructure spending with the private sector through, for example, PPP laws in Dubai and Oman, capital markets can provide funding that is suited to PPP-based projects.”

“For the regional insurance markets, gross premium income will continue to increase by up to 10 per cent in the GCC in 2018, outpacing our GDP forecasts. However, premium growth in the GCC insurance market will highly depend on new regulations and types of insurance cover, as well as government infrastructure spending in 2018. We also believe that the insurance markets in the GCC are likely to remain profitable in 2018, as companies gradually move toward more risk-based underwriting.

“We believe regulatory compliance and the implementation of VAT will be key challenges for insurers in the GCC’s two largest insurance markets – the UAE and Saudi Arabia – in 2018. While new risk-based regulations will be fully adopted in the UAE from January 2018, insurers in Saudi Arabia will be subject to on-going regulatory requirements as seen in 2017, when a number of companies were suspended from writing new business, due to non-compliance with applicable regulations.

“The timely implementation of VAT will be another key challenge for insurers in these two markets, as final rules of the new tax regime only became clear in late 2017. The introduction of VAT, which will be applicable on motor insurance and other non-life related products, except for medical insurance, is expected to lead to some rate increases.

“Overall, we expect that credit conditions for the insurers that we rate in the GCC will remain broadly stable in 2018, despite ongoing economic challenges in the region.”