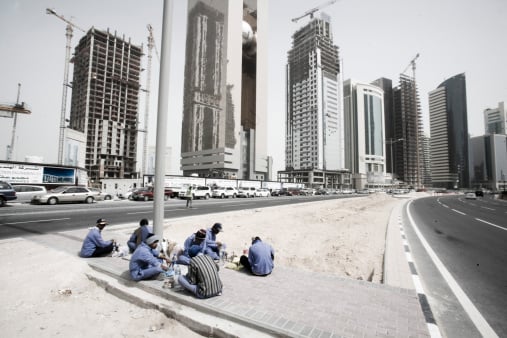 Qatar, host of the 2022 World Cup, is doing little to improve conditions for migrant workers despite promising reform last year, Amnesty International said on Thursday, but Doha said several of the allegations were inaccurate.

Amnesty said little had changed for the 1.5 million migrant workers and soccer’s governing body FIFA had a “clear responsibility” to put pressure on Qatar to do more.

“Without prompt action, the pledges Qatar made last year are at serious risk of being dismissed as a mere public relations stunt to ensure the Gulf state can cling on to the 2022 World Cup,” said Amnesty researcher Mustafa Qadri.

“Last year the government made promises to improve migrant labour rights in Qatar, but in practice, there have been no significant advances.”

Qatar’s Ministry of Labour and Social Affairs said in a statement: “Significant changes have been made over the last year to improve the rights and conditions of expatriate workers.”

It said the ministry had launched a wage protection system, an electronic payment system to ensure wages are paid on time and increased the number of labour inspectors. It said more accommodation was being built for more than a quarter of a million workers across Qatar.

Amnesty’s report rated Qatar’s response to nine migrant labour rights issues, saying late “limited progress” had been made on five, while authorities had “failed to make any improvements” in the other four.

“(FIFA) has yet to demonstrate any real commitment to ensuring Qatar 2022 is not built on a foundation of exploitation and abuse,” Qadri said.

Qatar unveiled proposed reforms a year ago including replacement of a law under which workers need their employer’s permission to change jobs and reforms to a law requiring workers to obtain an exit permit before leaving Qatar.

Amnesty said there had been no progress on those issues.

The human rights group said the proposed electronic payment system was still being implemented and many migrants interviewed “complained of late or non-payment of wages.”

Qatar had also failed to meet its target of having 300 labour inspectors in place by the end of last year, it said.

“There has been only limited progress on measures to improve safety on construction sites, regulate exploitative recruitment agencies and improve access to justice for victims of labour exploitation,” said the report.

A statement from Qatar’s Supreme Committee (SC) for Delivery & Legacy, in charge of organising the 2022 games, said its staff had helped raise money for Nepali workers to return home after the April 25 earthquake killed thousands of people and all requests to return home had been approved.

“The SC will continue to move forward… to deliver a FIFA World Cup that preserves the rights and dignity of all individuals who will work to make the tournament a success,” it said.