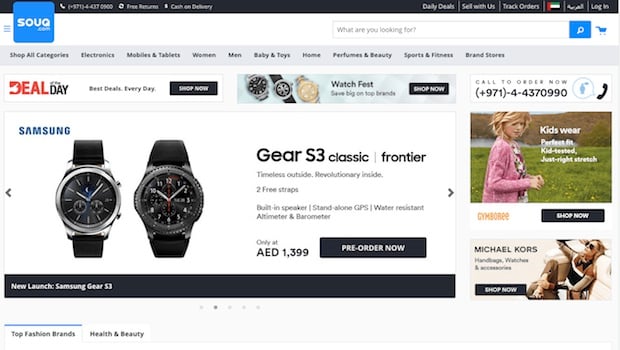 US online shopping giant Amazon has reportedly agreed a full acquisition of UAE-based e-commerce site Souq.com after previously backing away from a deal.

Bloomberg reported earlier this month that Amazon had restarted talks to acquire Souq for as much as $650m after discussions stalled in January due to a disagreement over the price.

Other bidders in the Goldman Sachs managed sales process, including mall operator Majid Al Futtaim all pulled out, the publication said.

Now The National reports that the full acquisition of Souq, which accounts for 78 per cent of e-commerce in the Middle East and North Africa, by Amazon has been agreed.

Reuters also reports that Amazon has agreed the acquisition in principle.

Souq was valued at $1bn in its last funding round in which it raised $275m from investors including Standard Chartered. The deal is understood to be worth less than that valuation.

The site had been expected to face a tough year following the announcement of noon.com– a $1bn rival platform backed by Emirati billionaire Mohamed Alabbar and the Saudi Public Investment Fund.

However, noon failed to meet its promise of a January launch with 20 million products and there has been no update as to when it will officially come online.

The Financial Times reports that Alabbar was actually among those in the running to acquire Souq but his bid was too low.

Amazon is believed to have been attracted to Souq due to its lack of regional presence in comparison to other markets like India.

Baird Equity Research analyst Colin Sebastian said in a note that Amazon would likely approach the deal with lessons from its 2004 acquisition of Joyo.com, which it used to gain foothold in the Chinese market.

Souq currently offers 8.4 million products after recently expanding into books and groceries and operates directly in the UAE, Egypt, Saudi and Kuwait, with shipping also available to Oman, Bahrain and Qatar.

The regional e-commerce market was estimated to be worth $20bn last year.