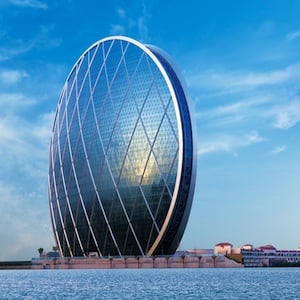 The builder of the Yas Marina Formula One Circuit said in a statement on Saturday that it made a net profit of 478.2 million dirhams ($130.2 million) compared to 189.1 million dirhams in the same period in 2011.

“The results reflect the significant deliveries of residential units and land plots at Al Raha Beach that began in the quarter and will continue through the year, supported by strong recurring revenues from our operating businesses,” Ali Eid AlMheiri, chairman of Aldar said in the statement.

Aldar’s total cash and bank balance was 5.8 billion dirhams at the end of the first quarter of 2012. The company signed a 4 billion dirhams revolving credit facility with National Bank of Abu Dhabi earlier this month.

Aldar, rescued twice by Abu Dhabi with funds amounting to nearly $10 billion, said last month that it may merge with Sorouh in what would be a government-backed tie-up.

Abu Dhabi’s largest developer by market value has been at the front of a property market slump in Abu Dhabi, the capital of the United Arab Emirates, which is facing challenges amid a huge supply of high-end homes entering the market.

Property prices in Abu Dhabi are expected to fall another 11 per cent from here, a Reuters poll showed in January.

State investment fund Mubadala, which earlier owned a 49 per cent stake in Aldar, transferred a 14-percent stake to Abu Dhabi Commercial Bank in return for a loan facility.

Abu Dhabi has held talks to offload all or part of the 49 per cent government stake in struggling Aldar in an attempt to stop its falling asset value from dragging down Mubadala.