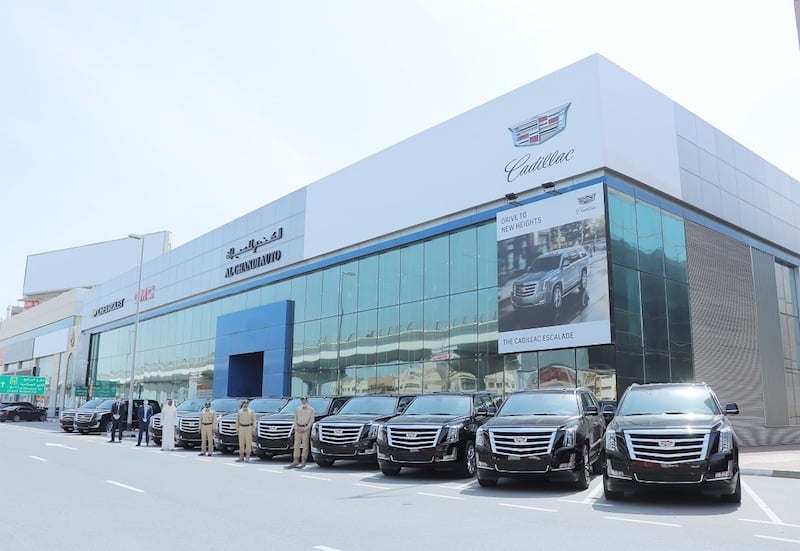 Al Ghandi Auto, the exclusive retailer for General Motors-owned Cadillac vehicles in the UAE, has donated 10 Escalades to the Dubai Police to help the emirate’s security force to combat the Covid-19 pandemic.

According to the Cadillac website, the 2020 Escalade has a dealer advertised price of Dhs376,000 inclusive of VAT.

“This generous donation of 10 Cadillac Escalades from Al Ghandi will greatly support our officers on the front line who are carrying out vital patrols to ensure the safety of residents in the emirate,” said Major General Abdullah Ali Al Ghaithi, director of the General Department of Protective Security and Emergency.

The Dubai Police already has a fleet of supercars including a Lamborghini Aventador, Ferrari FF, Maserati GranTurismo, Bugatti Veyron, McLaren MP4-12C and a very rare Aston Martin One-77.

It also has a fleet of superbikes. In 2014, Dubai Police also added a Can Am Spyder superbike to upgrade patrols and enhance police presence at tourist sites in the emirate.

More recently, in March, the police force added 10 new BMW Motorrad R1250RT-P motorcycles to its fleet that were delivered by AGMC, the official BMW Group importer for Dubai.

Other auto manufacturers are also taking steps to assist officials in the UAE with Covid-19 relief measures.

On April 29, Audi Volkswagen Middle East said that they had provided several cars to the Dubai Corporation for Ambulance Services (DCAS) to support efforts to counter the pandemic in the emirate.

The fleet of vehicles included an Audi Q3, Q5 and Q8 as well as the Touareg, Teramont, Tiguan and Passat from Volkswagen – all of which are being used to transport critical equipment, medical supplies and meals to team workers and their families living in the UAE, said a statement from the auto manufacturer.