After Big Delays, Kuwait Moves Ahead On Infrastructure - Gulf Business 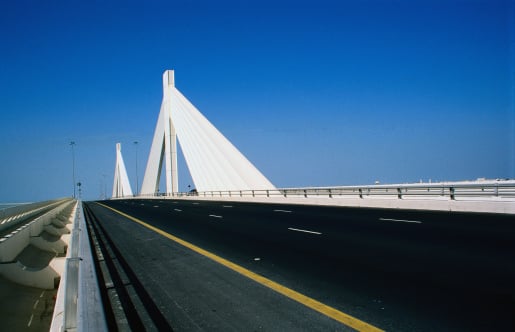 Freight trucks trundle down the dusty, potholed roads of Kuwait’s busiest port, running into traffic jams as they emerge into the surrounding streets. But after years of inaction, the government is finally moving to ease the congestion.

It is pushing ahead with a $2.6 billion plan to build a 36 km (22 mile) causeway, one of the longest in the world, connecting Shuwaikh port and densely populated southern Kuwait with the north of the country, near the Iraqi border.

Such big projects were stalled for years by political wrangling and bureaucratic inertia, leaving Kuwait with underdeveloped infrastructure and low levels of foreign investment in relation to its huge oil wealth.

In the last few months, however, authorities have begun issuing contracts for some of the projects, raising hopes that one of the region’s most under-performing economies may finally live up to its potential.

The government signed a contract with South Korea’s Hyundai Engineering and Construction Co in November to design and build the causeway over the next five years. Construction is due to start later this year.

“It is a very strategic project – we have been talking about this since the 1970s,” Abdulaziz Alkulaib, undersecretary at the Ministry of Public Works, told Reuters.

Last month, Kuwait signed a deal with a consortium led by France’s GDF-Suez, and including Sumitomo Corp of Japan, to build the Az Zour gas-fired power and seawater treatment plant in Kuwait.

This was seen as a breakthrough because it is the first of Kuwait’s major public-private partnerships, in which private firms will help to operate infrastructure. Once running in 2015, the plant is to account for some 12 per cent of Kuwait’s power generation capacity and a quarter of desalination capacity.

“It has taken a long time for these projects to begin, but this is an encouraging step,” said Daniel Kaye, senior manager for economic research at National Bank of Kuwait (NBK).

“It sends a positive signal to businesses and investors that projects are at last moving.”

The causeway and Az Zour projects are part of a 30 billion dinar ($107 billion) development plan that aims to diversify the economy and was approved by the ruling emir, Sheikh Sabah al-Ahmad al-Sabah, in 2010. The plan also includes a new airport terminal, an oil refinery, a metro system and hospitals.

In the fiscal year 2010/11, the first year of the plan, the government spent only 62 per cent of its target on the projects, and it has continued to undershoot targets since then.

One reason is the technical and administrative difficulties of carrying out complex projects through a government which lacks experience, expertise and a reputation for efficiency.

Politics have been an even bigger obstacle. Continual feuding between an elected legislature and the cabinet, chosen by a prime minister who is appointed by Sheikh Sabah, blocked parliamentary approval of development funds and led to a series of cabinet reshuffles which distracted from policymaking.

Last year the country was rocked by large youth- and opposition-led demonstrations demanding political reforms. The protests did not constitute an Arab Spring-style campaign for regime change, but they also distracted the government.

In the past few months, however, the environment for economic policy-making has improved. After parliament was dissolved ahead of snap elections on Dec. 1, the government was able to use executive powers to push through a raft of legislative measures and approvals.

Opposition MPs, some of whom had blocked state spending in the past, boycotted the elections. The result was a new 50 seat parliament with a larger number of pro-government legislators and political newcomers, who may be more willing to comply with the cabinet’s plans.

“This is in the master plan and it is set out by emiri decree. Whatever is in that master plan has to be implemented,” Alkulaib said of the causeway project.

Such statements are cheering the stock market, where the main index sank to an eight-year low last November but has since climbed about 12 per cent.

The new mood of optimism does not necessarily mean the government will get an easy ride for its projects. Political tensions have not disappeared and street protests have continued since the December elections, presenting the risk that political turmoil could eventually worsen again.

A majority of lawmakers in the new parliament voted last week to form a special committee to probe the process under which the contacts for the causeway and Az Zour were awarded; the committee is expected to reach a conclusion in three months.

NBK’s Kaye said it was important not to get carried away about prospects for investment in Kuwait because there were still political, technical and administrative hurdles.

“But we do now detect a greater determination on the part of the authorities to push ahead with key development projects.”

Kuwaiti economists say the causeway, which will cut the road distance between the north and south of Kuwait by two-thirds, will help to develop the neglected north of the country, where an urban area called Silk City is planned.

“Urbanisation in Kuwait is located in the southern coastal area but there is planned urbanisation in the northern region as part of the plan,” said Abbas al-Muqrin, professor of economics at the University of Kuwait.

“The shortcut to gain access to this area will revive the region economically.”

Silk City’s name recalls the Silk Road, the web of trade routes which linked Europe and Asia centuries ago, and the project is designed to form part of a trade hub near a planned new port, Mubarak al-Kabeer. Some economists think the port could eventually become a rival to Iraq’s Umm Qasr.

Kuwaiti authorities hope Silk City will become home to around 530,000 people, or about 14 per cent of the country’s current population.

“The causeway will create new chances for people to work there and live there,” senior project engineer Mai Ebrahim al-Mesad said. “It will be a signature for Kuwait.”