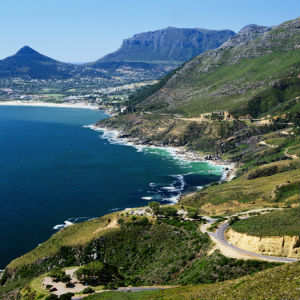 Three times the size of New York and combining rare wildlife, undulating scenery and compelling history, Cape Town possesses an unrivalled sense of energy. Thanks to superb hosting skills during the FIFA World Cup 2010, South Africa’s mother city has cast off old perceptions, to become the most exuberant destination in the rainbow nation.

All journeys here must start at the flat-topped Table Mountain, a resounding symbol of the city’s strength, history and hope.

For a sense of achievement climb its summit, the views at the peak will be worth all the effort. The less ambitious can opt for the unnerving cable car ride to the restaurant at the pinnacle. For more spellbinding scenery, a drive along Chapman’s Peak to Cape Point is one for the must-do list.

When it comes to beach life, only the fearless locals tackle the freezing Atlantic Ocean hemming Camps Bay and Clifton Beach. These shores are a haven for trendy jet-setters and food connoisseurs, lured by the Michelin-star worthy restaurants and cosmopolitan bars. Alternatively, Boulders Bay is an ornithologist’s dream, occupied by a penguin colony where visitors can tread water among the packs of flightless birds. Beware: they bite!

For gastronomes, South Africa’s local farms produce meat so succulent even vegetarians may be turned. Cafe Royale, on Long Street, is so famous for its burgers that even the friendly locals are reluctant to reveal its location. Kalk Bay’s glass- fronted Harbour House serves both spectacular seafood and crashingly beautiful views – during migration season it’s possible to see whales. For elegant fare, Victoria and Albert Waterfront presents world-class cuisine, including Nobu.

Cape Town is also imaginative when it comes to shopping. Greenmarket Square is perfect for souvenirs, fashion and homeware. Its sidestreets boast quaint boutiques stocking original creations by local designers. For something Afrikaans, Pan-African Market on Long Street offers great variety. The African Music store at number 134 has an eclectic array of albums. Pick up something by Mama Afrika, the country’s legendary singer.

Cape Town may be a booming metropolis, but it is one without pretensions.