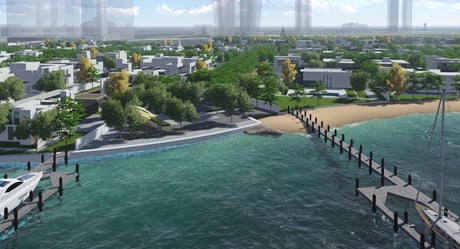 The launch follows the off-market sale of the first phase, during which Dhs500 million was committed in sales reservations, the developer said.

All the land plots, located within a gated community, are designed to allow owners to develop homes that meet their own personal need, the statement said. Purchasers will also be provided with clear design guidelines, it added.

Mohammad Al Mubarak, CEO, Aldar Properties, said: “The exceptional location of Nareel Island in the heart of Abu Dhabi makes it a once in a lifetime opportunity for Emiratis who are looking to build homes for themselves and future generations.

“We are confident that it will continue to see strong demand over the coming sales phases.”

Abu Dhabi’s property market is expected to witness a cooling down in prices this year, after seeing strong growth in 2013 (31 per cent) and 2014 (24 per cent), according to Cluttons.

In Q1 of this year, the growth rate slowed to just 0.5 per cent, thanks to oil price volatility and decreased government spending in certain areas.

However, developers have continued to launch new projects, including in the affordable segment, to keep pace with the growing population.

Aldar has launched three new residential developments so far this year including West Yas, Mayan and Meera, which will bring 2,000 new units to Abu Dhabi, across various market segments.

“Over the next four to five years, Aldar will launch up to 5,300 further units across existing destinations. These properties will help us to deliver on our strategy to monetise our land bank and offer more value to our shareholders,” Mubarak recently told Gulf Business.