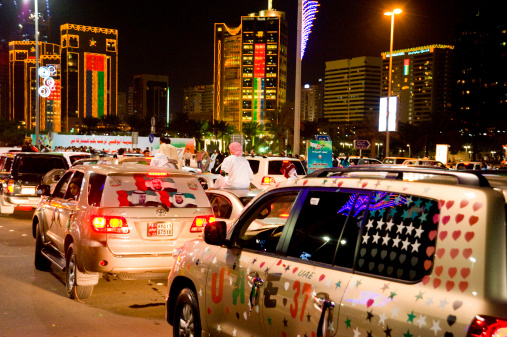 Motorists in the UAE capital have been urged to follow guidelines when decorating cars for the upcoming 47th National Day celebrations in the country.

According to a statement by Abu Dhabi Police, vehicle owners can decorate their cars with appropriate decals from November 25 to December 6.

“Drivers who do not comply with the allotted time frames will be fined,” the statement warned.

The UAE’s National Day is observed on December 2, which falls on Sunday this year. Both public and private sector workers have been given two days off (Sunday and Monday) to celebrate the occasion.

To ensure the safety for pedestrians and drivers, the Abu Dhabi Police has issued a traffic management plan.

Under the rules, the decorations “must not obstruct the vision of the driver in any form”.

Motorists have also been cautioned not to install flagpoles on their vehicles, not to blur or cover their licence plates, and not to change the original paint colour of the vehicle.

Khalifa Mohammed Al Khaili, director of the Traffic and Patrols Directorate at Abu Dhabi Police, also added that drivers and passengers should not – use confetti sprays, overcrowd vehicles, stick their bodies out of windows and ride on top of vehicle roofs.

Drivers are also expected not to leave their vehicles, and the use of camels and horses on public roads is prohibited.

Al Khaili also urged pedestrians to use designated crossings, and called on the public not to throw waste items, not to leave skid marks on roads, and not to obstruct the flow of traffic and designated taxi and bus stands.

He stated that there will be an increased level of security during the celebrations and urged the public to adhere to the rules and cooperate with the police.