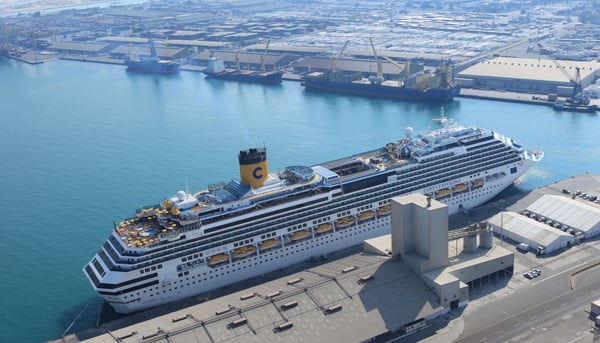 The concept designs for Abu Dhabi’s permanent cruise terminal are expected to be ready by next year, according to Mubarak Al Muhairi, director general, Abu Dhabi Tourism and Culture Authority (TCA Abu Dhabi).

Speaking at the Seatrade Middle East Cruise forum, Al Muhairi said that the site for a permanent facility has been selected.

“We have made no secret of the fact that we intend to press ahead with the building of a permanent terminal,” he said.

“The current temporary terminal site has now been earmarked as the site of the permanent one.”

Abu Dhabi has grand plans to develop its permanent facility as it looks to tap into a growing cruise tourism market in the emirate. A total of 75 scheduled vessel calls and more than 100,000 passengers are expected from all over the world during the current cruise season which lasts for five and a half months.

“We want a state-of-the-art facility which meets all your requirements, including warehousing and cold storage,” said Al Muhairi.

“It’s essential to have your thoughts early in the planning process. We’re ready and eager to listen,” he told delegates at the forum.

Abu Dhabi currently operates a temporary facility at Mina Zayed port, which was recently upgraded and expanded to include a range of passenger services, Al Muhairi said.

Abu Dhabi Ports Company (ADPC) had earlier announced plans to develop a souq and heritage area along with entertainment activities for cruise tourists at the permanent facility.

Al Muhairi added that TCA Abu Dhabi is planning to develop a cruise day stopover in the emirate’s western region of Al Gharbia.

“A team is working on this plan now and they have identified a stretch of stunning beach on Delma Island and has the backing of the local municipality,” he explained.

Abu Dhabi’s tourism chief also said that they will work in cooperation with cruise operators and agents to nurture the sector’s growth.

“We have listened to your need for a streamlined multi-entry visa for cruise passengers,” Al Muhairi said.

“We are aware of your concerns and believe this is needed to grow your business, and ours.”