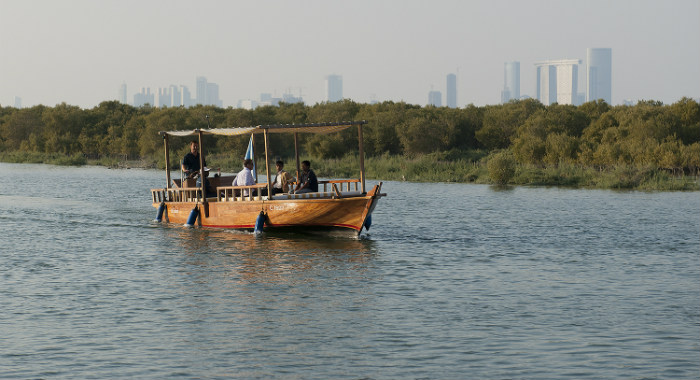 The abras will travel from the Souk at Qaryat Al Beri to the Eastern Mangroves Promenade, with stops on the way at three five-star hotels at Khor Al Maqtaa, including the Ritz-Carlton Abu Dhabi, Grand Canal and Fairmont Bab Al Bahr hotels.

The 25-minute journey will run one return trip every hour.

The service will currently only operate on weekends, from 10am until 6pm on Fridays and Saturdays, but is expected to become daily in the near future, the statement said.

Antonio Neto, manager of Capt. Tony’s, which is operating the Abra Water Hopping Service, said: “Passengers can experience the beautiful views of the mangroves, Sheikh Zayed Grand Mosque, the hotels and marinas and enjoy a trip that is not only fun, but also practical and affordable. These are two very popular areas for residents and tourists with a host of restaurants and attractions.”

“Since the inauguration of Eastern Mangroves Hotel & Spa by Anantara we have we have been excited to make exploring the mangroves accessible to as many people as possible,” said Wael Soueid, Area General Manager, Anantara Hotels & Resorts Abu Dhabi.

“The tranquil mangroves offer an escape from the fast pace of day to day life.”

The two 31-foot abras in the fleet have been designed and built in Abu Dhabi at a local boatyard, with a third currently under construction, the statement added.

Abu Dhabi is focusing on improving its tourism offerings, and targeted welcoming 3.1 million guests last year. According to the TCA Abu Dhabi, over 2.8 million visitors checked into the emirate’s hotels in the first 10 months of the year – a 25 per cent increase on the same period last year.

In December, news website CNN.com named the UAE capital among its Top 10 destinations for 2015.