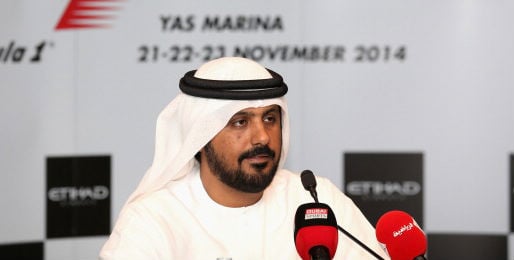 Abu Dhabi’s circuit chief has defended Formula One’s decision to award double points for the final grand prix of the 2014 season, which the UAE capital will stage in November.

The International Automobile Federation (FIA) made the points change in a bid to keep the championship alive as long as possible after Red Bull won four successive drivers’ and constructors’ titles and television audiences fell.

But the new rule has drawn an angry response from many fans and world champion Sebastian Vettel branded it absurd.

“The fact it came to us, that’s good for Abu Dhabi, it will keep things exciting to the last minute – I feel the mentality of the drivers will change,” Al Tareq al-Ameri, chief of executive of Abu Dhabi’s Yas Marina circuit, told a news conference.

“People don’t like changes, but for a sport like this, from the history, there are always changes happening with Formula One and that’s what keeps it exciting.”

Abu Dhabi will stage the last of 19 races this season, with Formula One hoping for more of a fight to the finish than last year, when Germany’s Vettel sealed a fourth successive world crown with three rounds to spare.

The UAE capital, which joined the F1 calendar in 2009, appears to have an evens chance of this year’s championship going to the wire, with five of the last 10 titles decided on the last day, but Ameri said Abu Dhabi would not lose its lustre however the season develops.

“For the fans that follow the F1 championship it’s not about determining who is the champion at what round, they stick with it all the way through,” said Ameri as he unveiled plans to increase Yas Marina’s capacity to 60,000 from 55,000.

“It’s an exciting event for them and I think each round by itself provides a unique proposition,” he added.

Mercedes have won the first two races of 2014 – Nico Rosberg in Australia and Lewis Hamilton in Malaysia.

Vettel earned Red Bull’s first points of the season with third place in Sepang on Sunday, a step in the right direction for a team that looked in disarray during winter testing after their Renault power unit suffered reliability woes.