A Game Of Branding: Business In Sport - Gulf Business 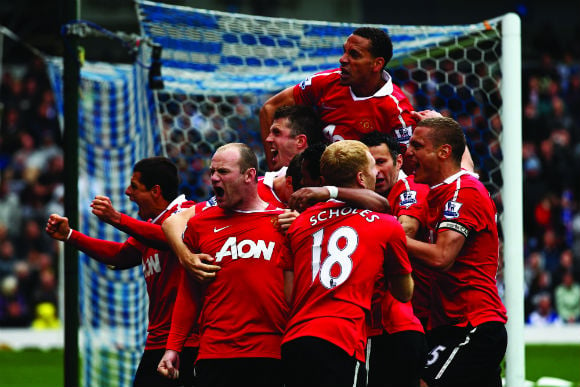 Football commands extraordinary respect and a burgeoning fan following in the UAE. Expatriates and locals in the country fervently follow the sport and passionately support teams and leagues from across the world.

And with an improvement in the UAE’s economy and a rise in consumer spend, banks are now hoping to cash in on this loyalty.

As part of the deal, the lender will launch Manchester United co-branded credit, debit and prepaid cards in the UAE. Speaking to Gulf Business, R. Sivaram, senior vice president and head of Cards Business at Emirates NBD, said that the bank was targeting the enormous MU fan base in the emirates.

“The club has 900,000 fans in the UAE and close to 220,000 UAE customers visit the Manchester United website. So we saw a huge opportunity in this actively engaged community,” he said.

While the new co-branded cards will function just like regular Emirates NBD credit and debit cards and offer the same core benefits, they also come with a range of ‘red’ – Manchester United’s colour – offers for fans.

Loyal customers receive special ‘red points’ on their spend, which can be redeemed for a variety of branded official club merchandise such as caps, key chains, laptop bags, mugs and flags.

The bank is also offering 60 UAE fans the chance to win fully paid packages to watch the club live in action every season.

“We have to ensure that whatever we introduce in the product gives us an opportunity to make revenues and ultimately reward our shareholders, and we believe that this concept is very strong,” said Sivaraman.

As part of the three-year agreement, UAB will serve as the club’s exclusive financial partner in the UAE.

Paul Trowbridge, CEO, UAB, said, “The club enjoys tremendous popularity amongst UAE football fans and so the alliance creates a great platform for us to incentivise our clients with a range of FC Barcelona privileges including hospitality match tickets, Barca-themed banking products and official merchandise.”

The bank will also reward 1,000 customers with exclusive hospitality seats to watch FC Barcelona live over the next three years, it said.

Sivaraman says sports partnerships [with banks] are inevitable because of the strong affinity that customers have with clubs.

“With the market getting saturated, we have to find new ways of reaching out to customers,” he said.

The move comes amid a backdrop of the UAE’s ballooning consumer credit, which grew to reach Dhs278.4 billion (over $75 billion) in July, according to Central Bank data. The amount has risen consecutively over the last seven months.

However, lending is expected to slow with the launch of the country’s upcoming Al Etihad Credit Bureau next year.

“Banks will stop lending because they will discover every single customer has over-borrowed,” Abdul Aziz Al Ghurair, chairman of the UAE Banking Federation recently told reporters.