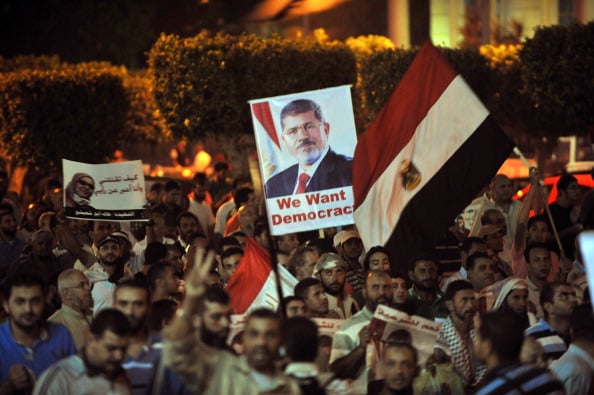 Both sides called their supporters on to the streets on Thursday, while Mursi supporters in two protest camps in Cairo strengthened sandbag-and-brick barricades in readiness for any action by security forces.

Acting President Adli Mansour, in a message on the eve of the Muslim Eid al-Fitr holiday, said Egypt was in critical circumstances. The interim government would press on with its own plan to hold new elections in nine months, he said.

“The train of the future has departed, and everyone must realise the moment and catch up with it, and whoever fails to realise this moment must take responsibility for their decision,” he said.

U.S. envoy William Burns headed home after days of trying to broker a compromise between the government and Mursi’s Muslim Brotherhood. European Union envoy Bernardino Leon stayed on in the capital in the slim hope of reviving the effort.

But Brussels and Washington said they were very concerned that the Egyptian parties had not found a way to break what they called a dangerous stalemate.

“This remains a very fragile situation, which holds not only the risk of more bloodshed and polarization in Egypt, but also impedes the economic recovery, which is so essential for Egypt’s successful transition,” U.S. Secretary of State John Kerry and EU foreign policy chief Catherine Ashton said in a joint statement.

The army ousted the Islamist Mursi, Egypt’s first freely elected leader, on July 3 after huge street demonstrations against his rule.

Mursi and leaders of his Muslim Brotherhood have been rounded up and detained. But thousands of their supporters have demonstrated to demand his reinstatement.

Nearly 300 people have been killed in political violence since the overthrow, including 80 Mursi supporters shot dead by security forces on July 27.

Mansour earlier on Wednesday blamed the Muslim Brotherhood for the breakdown of the international mediation effort, and for any violence that might result.

Interim Prime Minister Hazem el-Beblawi said the government’s decision to dismantle the protest camps was final and its patience had nearly expired.

Beblawi accused protesters of inciting violence, blocking roads and detaining citizens, and he warned that any further violence would be met “with utmost force and decisiveness.”

Muslim Brotherhood spokesman Gehad El-Haddad, asked about the threat, told Reuters: “This means they are preparing for an even bigger massacre. They should be sending us positive signals, not live bullets.”

On Wednesday afternoon, people streamed into the camp outside Rabaa al-Adawiya mosque in northeast Cairo, where demonstrators have built barricades and armed themselves with sticks and rocks. Many were women and children.

“We will not leave until we get Mursi back,” said Salma Imam, 19, student at Al-Azhar university. “It’s not a government. The real government was chosen by the Egyptian people one year ago. This is not a legal government.”

Any action could still be some time away, however.

Egyptians celebrate Eid, which marks the end of the Islamic fasting month of Ramadan, from Thursday to Sunday, an inauspicious time for any act of violence.

Egypt’s leading Islamic authority on Wednesday announced plans to host talks on the crisis after Eid, which might also forestall an assault by the security forces.

“There are some initiatives that can be built upon to start national reconciliation,” an al-Azhar official told the state news agency MENA.

The Grand Sheikh of al-Azhar, Ahmed al-Tayeb, appealed to Egyptians for an Eid of reunion and unity before it was too late.

Mursi’s downfall was driven by fears he was trying to establish an Islamist autocracy, coupled with a failure to ease economic hardships afflicting most of Egypt’s 84 million people.

The army says it was acting at the behest of the people and has lain out its own transition plan for new elections, a move rejected by the Brotherhood.

Hamdeen Sabahi, a leftist who finished third in last year’s presidential election, said the Islamists were in a state of denial about what had happened.

“The Muslim Brotherhood must accept the will of the people. I can’t imagine any political solution,” he said in a radio interview.

Pro-Mursi parties and leftists who backed his removal called rival demonstrations for Thursday, making the public holiday a potential flashpoint.

The National Alliance to Support Legitimacy, which includes the Brotherhood, urged Mursi supporters to take to the streets for an “Eid of Victory”.

Egypt is the Arab world’s largest country, a bulwark in the United States’ Middle East policy, and maintains an uneasy peace with Israel.

Dutch Foreign Minister Frans Timmermans, one of a host of foreign officials who have visited Cairo as the crisis unfolded, said he saw the confrontation worsening.

“More people will turn to the streets to protest and the tendency in the armed forces to repress that will mount,” he told Reuters.

“So I think there’s a need to be worried about the next days and weeks.”