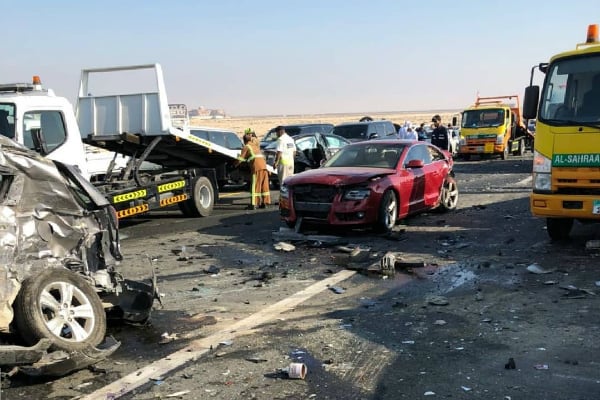 More than 20 people were injured in a 44-car pileup on Abu Dhabi’s Sheikh Mohammed Bin Rashid Road on Tuesday morning during foggy conditions.

Abu Dhabi Police said the crash occured at about 8:00am and was caused by low visibility but also a failure by drivers to leave sufficient distance between vehicles and a lack of consideration for road conditions.

A video of the incident posted on social media showed drivers fleeing their cars in extremely foggy conditions as more vehicles, including a lorry add to the pile-up.

Traffic was directed to the side of the road while the rescue operation took place.

Warning messages were also sent to drivers urging them to take alternative routes and reduce their speed following the incident.

Khaili emphasised the need for drivers to exercise caution during foggy conditions by allowing for the double the usual stopping distance between vehicles, limiting the use of hazard lights unless they come to a complete stop on the right shoulder and avoiding unnecessary overtaking.