2012 One Of "Bloodiest Years" For Journalists - Gulf Business 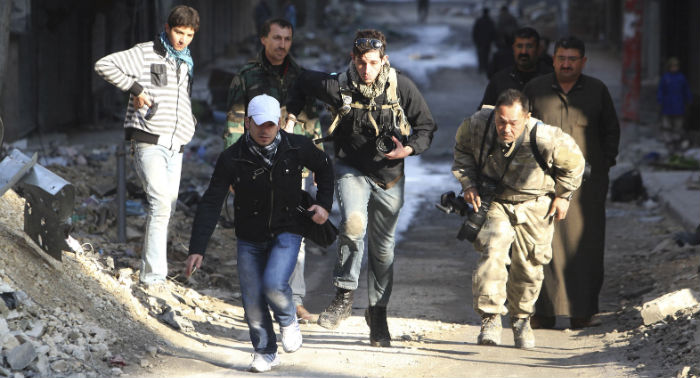 A heavy death toll in war zones such as Syria and Somalia made 2012 one of the bloodiest years for journalists, with 121 killed, an international journalists’ group said this week.

The Brussels-based International Federation of Journalists (IFJ) said the figure was up from 107 journalists and other media workers killed in targeted attacks, bomb blasts and cross-fire incidents in 2011.

The heavy casualties were the result of a “systematic failure by governments and the United Nations to fulfil their international obligations to protect and enforce journalists’ basic right to life”, the group said.

“The death toll for 2012 is another indictment of governments which pay lip service to the protection of journalists but have consistently failed to stop their slaughter,” Jim Boumelha, IFJ president, said in a statement.

Syria, where more than 45,000 people are estimated to have been killed in a 21-month revolt against President Bashar al-Assad, topped the list of the most dangerous countries for media in 2012, with 35 journalists or other media workers killed.

The IFJ said 18 journalists had been killed in 2012 in Somalia, where African peacekeepers are battling al Qaeda-linked Islamist rebels, turned the country into a media killing field.

Organised crime in Mexico and insurgents in Pakistan were blamed for the 10 journalists killed in each of those countries during the year.

Five each were killed in Iraq and the Philippines.

The IFJ, which represents more than 600,000 journalists in 134 countries, said that, in many cases, journalists were deliberately targeted because of their work and with the aim of silencing them.

The group said it was counting on a new U.N. plan of action on the safety of journalists to deliver. The plan includes helping countries draw up laws promoting freedom of expression, awareness campaigns about media freedoms and threats to journalists, and guidance on keeping journalists safe.

The IFJ’s figure for journalists’ deaths was higher than the total reported by a Paris-based rights group on Dec. 19. That group, Reporters Without Borders, said 88 journalists were killed doing their job in 2012, more than in any year since monitoring started 17 years ago.